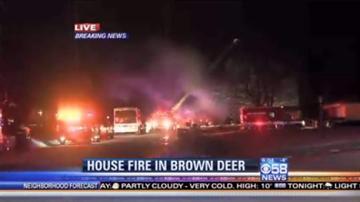 BROWN DEER -- The Milwaukee County Medical Examiner's Office has responded to a death at a Brown Deer house fire. We have confirmed this home is owned by a former educator charged with child sex assault.

The fire broke out shortly after 5 a.m. Monday near 63rd and Brown Deer Road and a preliminary report said there was heavy smoke and flames and that people may be trapped inside of the home.

Police say they found a person in the front room of the house, but haven't identified the person yet. Brown Deer police has indicated this fire is suspicious, because they found someone dead.

The home is owned by Ronnie Johnson, a former principal at a private school. Johnson was accused of sexually assaulting three brothers who used to visit his home. The alleged sexual assault took place ove the course of 10 years. Read our report about these allegations.

Monitor CBS58.com and tune into CBS 58 for updates.