One dead, two injured in crash at 11th and Mitchell 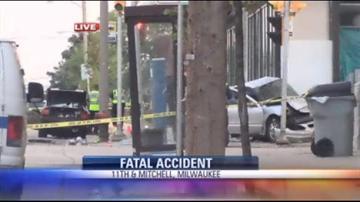 MILWAUKEE -- One woman is dead and two men are in the hospital with serious injuries following an overnight crash at 11th and Mitchell streets.

Milwaukee police said they were called to a two-vehicle crash at the intersection just after 3:15 a.m.

A 30-year-old Milwaukee man was driving northbound on S. 11th Street when he ran a red light and hit a car traveling eastbound on Mitchell Street before hitting a building.

A 27-year-old woman riding in the car that was hit died at the scene. The 28-year-old driver of that car was taken to the hospital with critical injuries.

Police are recommending criminal charges for the 30-year-old driver, who remains at a local hospital with injuries.