On parents' "back to school" shopping list: Bulletproof backpacks 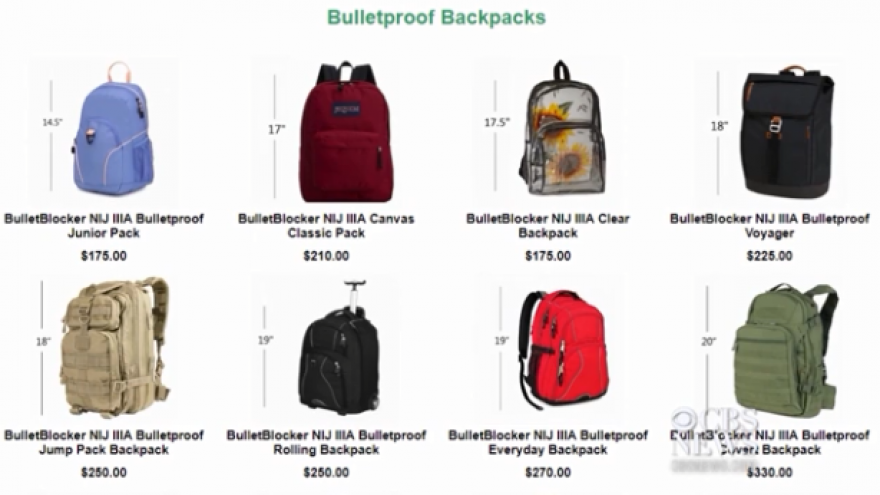 (CBS NEWS) As kids are getting ready to return to classrooms, a new item is landing on the list of "back to school" supplies: bulletproof backpacks.

Sales of the bags are rising following high-profile school shootings including the February attack in Parkland, Florida, that killed 17 and a May attack that left 10 dead in Santa Fe, Texas. Demand surged after the shooting at Florida's Marjory Stoneman Douglas High School, the CEO of one bulletproof backpack maker said.

"We've seen a dramatic increase in sales -- I'd probably say 300 or 400 percent over the year -- due to the Parkland shooting mostly," Joe Curran of Bullet Blocker told WUSA in an interview.

The backpacks on Bullet Blocker's site retail for between $100 and $500. They're made with the same material as police body armor and are designed to protect users from handgun and shotgun bullets. Curran said the industry standard recommends replacing the equipment every five years.

Another option is buying a bulletproof panel, such as those sold by Safe Life Defense, which can be transferred from one bag to another.

Both manufacturers told WUSA the backpacks can withstand shots from handguns and shotguns, but not rifles like an AR-15. That model was used by the Parkland shooter and in many of our country's deadliest mass shootings.

As for where to purchase the backpacks, there are some gun shops that stock them, though major retailers do not. WUSA called a dozen major retailers, including Target and Dick's Sporting Goods, and none stocked the item.