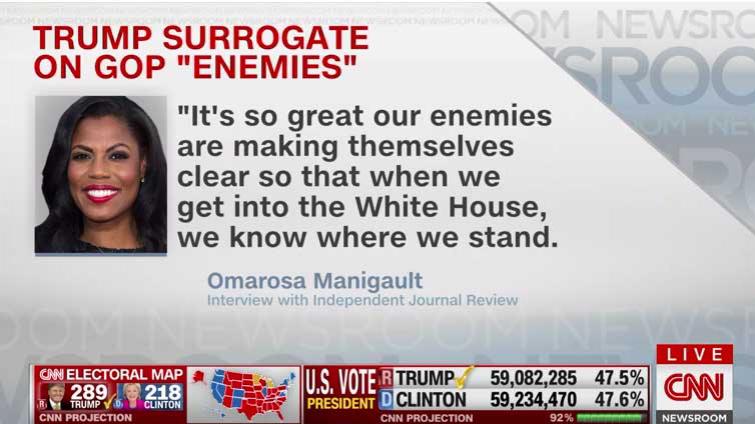 Washington (CNN)Donald Trump surrogate Omarosa Manigault said the President-elect's campaign is keeping a list of people who did not support his run to the White House.

"Let me just tell you, Mr. Trump has a long memory and we're keeping a list," Manigault, the campaign's director of African-American outreach, told the Independent Journal Review, a conservative magazine.
Manigault made the comment in response to Sen. Lindsey Graham's tweet that he supported conservative presidential candidate Evan McMullin.
Manigault, an ordained minister, responded by suggesting that the South Carolina Republican was an enemy and said "God bless him."
"If (Graham) felt his interests was with that candidate, God bless him. I would never judge anybody for exercising their right to and the freedom to choose who they want," she said.
"It's so great our enemies are making themselves clear so that when we get in to the White House, we know where we stand," the former reality show contestant added.
Graham, a Trump primary opponent, pledged along with other Republican candidates to support whoever won the Republican nomination.
Share this article: