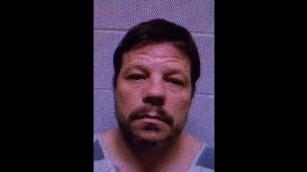 Vance, who was accused of killing two relatives and shooting two officers on October 23, was killed in Dewey County, Oklahoma, after exchanging gunfire with authorities and leading them on a pursuit, U.S. Marshals Service spokesman Dave Turk told CNN.Earlier on Sunday, Vance, 38, of Chandler, Oklahoma, managed to elude authorities after he left his campsite just north of Hammon and fled in his car.

But around 9:30 p.m., Dewey County Sheriff Clay Sander pulled over a vehicle that Vance was traveling in, and gunfire was exchanged, authorities said.Sander, who was shot in the left forearm and shoulder, was in surgery early Monday, according to Ellis County Sheriff Shane Booth.

Vance escaped the shootout with Sander and authorities gave chased, Turk said. About 45 minutes later, a trooper from the Oklahoma Highway Patrol encountered Vance and a second shootout took place, killing Vance, Turk said.Vance had been on the run since allegedly injuring the two officers in Wellston during a shootout, according to the Lincoln County Sheriff's Office.

Emergency officials in Lincoln County, east of Oklahoma County, said Vance shot and wounded the two officers after they responded a disturbance call. The wounded officers returned fire, striking Vance at least once.

Vance, who was recently charged with child sex abuse, fled in a stolen patrol car. He was believed to be carrying an AK-47.hat evening, investigators believe Vance shot at a woman, injuring her as he stole her Lincoln Town Car.

Authorities later spotted a similar car at a house in Luther, northeast of Oklahoma City. Police found the bodies of Robert and Valerie Kay Wilkson, who were Vance's aunt and uncle, according to CNN affiliate KFOR-TV.

Both were stabbed and Robert Wilkson had been shot. Based on the stab wounds, authorities said the killer apparently tried to behead Wilkson and dismember his wife.Vance boasted about his alleged crimes on social media, posting videos on Facebook. In one instance, he pointed at a weapon on the floor of his vehicle -- possibly an AK-47 -- and hinted at more violence to come.

Another of Vance's uncles said shortly after the initial shooting that his nephew may have been plotting the rampage for weeks.

Vance, who had recently been released from jail, was angry after he was arrested in July on the accusations of child sexual abuse, the uncle told KFOR.

"Everything that was said, it was all a setup," Vance said on Facebook.