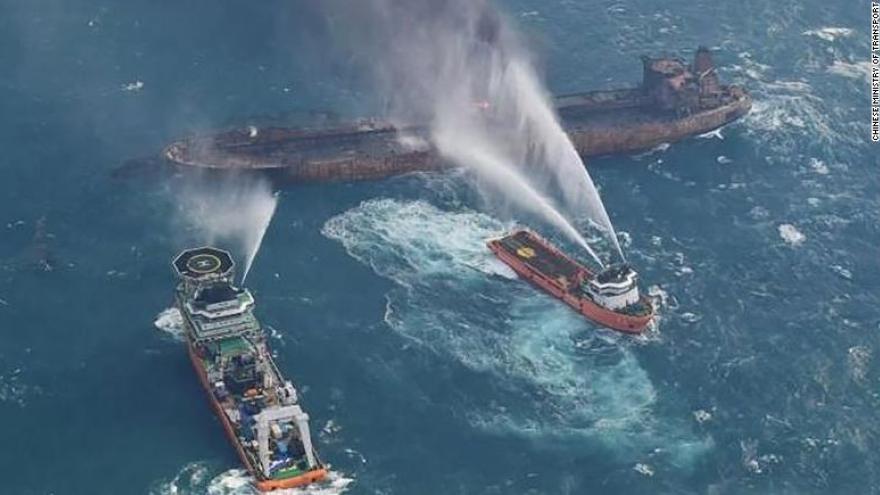 Beijing (CNN) -- Part of an oil tanker that has been ablaze for days off the coast of Shanghai exploded Wednesday, forcing rescue boats searching for 31 missing sailors to retreat, Chinese authorities said.

The Panama-registered tanker, Sanchi, was carrying 136,000 tons -- around 1 million barrels -- of oil from Iran to South Korea when it collided with the Hong Kong-registered CF Crystal freighter in the East China Sea on Saturday evening. Since then, the tanker has been ablaze and drifting in the waters between Shanghai and southern Japan.

Chinese authorities had on Monday warned that the vessel could explode.

Thirty Iranian and two Bangladeshi sailors were onboard during the catastrophic collision. So far, no survivors from the tanker have been found and only one body was recovered.

The CF-Crystal had been transporting food from the United States to the Chinese province of Guangdong, the China's Ministry of Transport said, adding that its 21 crew members has all been rescued.

The ministry reported that 14 vessels were searching for the missing sailors in the tanker's vicinity before the explosion.

Cleanup boats are also on hand to deal with light crude spilled in the accident, though the extent of the spill is unclear.

Images of the tanker an hour earlier showed thick plumes of black smoke rising from the vessel, as other boats tried to extinguish the flames with water jets.

With a length of 900 feet (274 meters) and displacing more than 85,000 tons, the Sanchi is almost as big as the US Navy's Nimitz-class aircraft carriers, according to the ship-tracking site marinetraffic.com.

Iran's Shana news agency reported that the Sanchi was managed by the National Iranian Tanker Company and that its cargo was worth around $60 million. Shana said the oil had been purchased by South Korean customers.