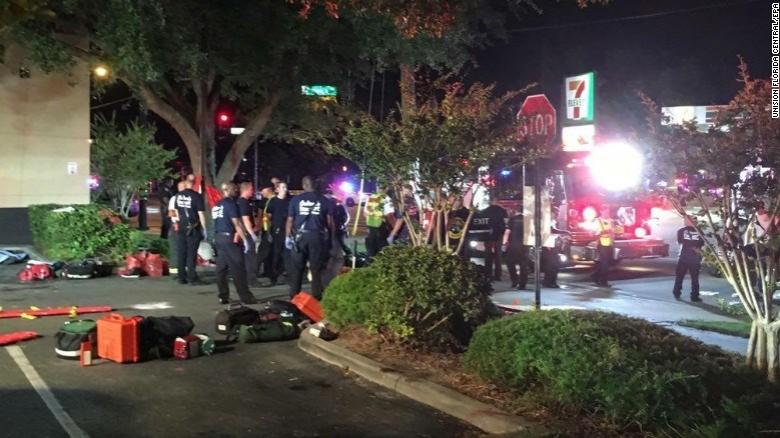 The City of Orlando has begun posting the names of victims of the Pulse nightclub shooting that lost their lives during the attack. Names are only added to the list when family members have been notified.

According to the latest numbers from authorities, 50 people died and 53 were injured.

(CBSNews) ORLANDO -- Authorities have started to name the victims of the mass shooting at a gay nightclub in Orlando, that left at least 50 people dead, and 53 people injured.

On their website, the City of Orlando released the names so far of four of the deceased victims: Edward Sotomayor Jr., Stanley Almodovar III, Luis Omar Ocasio-Capo, and Juan Ramon Guerrero.

The city said the next of kin of those listed had been notified, and they will continue to update the list as families are contacted.

At least 53 people were hospitalized, most in critical condition, officials said. A surgeon at Orlando Regional Medical Center said the death toll was likely to climb.

Witnesses described a chaotic scene when the gunfire began shortly before the club known as Pulse was to close.

"Some guy walked in and started shooting everybody. He had an automatic rifle, so nobody stood a chance," said Jackie Smith, who had two friends next to her get shot. "I just tried to get out of there."

Relatives and friends, many in tears, gathered outside the hospital to learn the fate of loved ones.

Smith did not know the conditions of her wounded friends. She came out of the hospital and burst into tears.

Christine Leinonen drove to Orlando at 4 a.m. after learning of the shooting from a friend of her 32-year-old son, Christopher Leinonen, who was at Pulse and is missing.

She had not heard from her son and feared the worst.

"These are nonsensical killings of our children," she said, sobbing. "They're killing our babies!"

She said her son's friend Brandon Wolf survived by hiding in a bathroom and running out as the bullets flew.

A woman who was outside the club early Sunday was trying to contact her 30-year-old son, Eddie, who texted her when the shooting happened and asked her to call police. He told her he ran into a bathroom with other club patrons to hide. He then texted her: "He's coming."

"The next text said: 'He has us, and he's in here with us,'" Mina Justice said. "That was the last conversation."

A bartender said she initially thought the gunshots were music. But after a second shot, there was a pause, followed by more shots. That's when Tiffany Johnson realized something was wrong.

Johnson said people dropped to the ground and started running out of the club. She ran to a fast-food restaurant across the street and met one of her customers who let her get in his car. They drove away.

Club-goer Rob Rick said the shooting started just as "everybody was drinking their last sip."

He estimated more than 100 people were still inside when he heard shots, got on the ground and crawled toward a DJ booth. A bouncer knocked down a partition between the club area and an area where only workers are allowed. People were then able to escape through the back of the club.

Christopher Hansen said he was in the VIP lounge when he heard gunshots. He continued to hear shooting even after he emerged and saw the wounded being tended across the street.

"I was thinking, 'Are you kidding me?' So I just dropped down. I just said, 'Please, please, please, I want to make it out,'" he said. "And when I did, I saw people shot. I saw blood. You hope and pray you don't get shot."