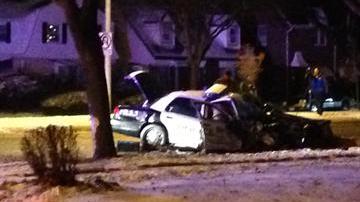 MILWAUKEE-CBS 58 News on the scene Monday night of a squad car crash.

The wreckage was in the 3700 block of Roosevelt.

It happened a little before 6 p.m.

Two officers in the squad were taken to Froedtert Hospital with non life threatening injuries.

The cause of the crash is unknown at this time. Although it did appear that the car hit a tree.

Police say the District 7 officers were responding to a foot pursuit in the area at the time.

Look to the CBS 58 News at 10 for the very latest and continuing updates here on CBS58.com.