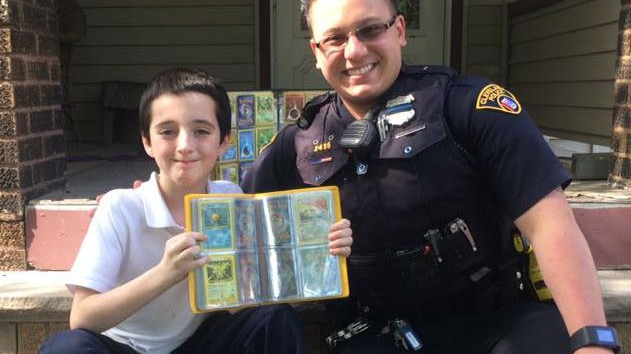 OHIO - (CNN) A young Pokemon enthusiast endured a roller coaster of emotions when his collection of trading cards was stolen by another boy, then retrieved, and then magically multiplied by a generous Cleveland police officer.

Yes, the biggest trading card craze of the 90's is still going strong, and it still contains all of the high drama and friendship-ruining potential you remember. Take 9-year-old Bryce, who had his Pokemon collection snatched right out of his hands.

Officer Jimmy Grotenrath of the Cleveland Police Department's 4th District was called to look into the card-napping, and he felt for the boy. He, too, had collected Pokemon cards as a child. Luckily, Grotenrath and his partner were able to retrieve most of Bryce's stash.

"Some of the neighborhood kids were actually able to help us locate this boy," Grotenrath told CNN. "We talked to the boy's parents and the parents confronted the boy. He brought the cards back out and handed them over and apologized."

However, some of the cards were still missing, and Bryce's disappointment led Grotenrath to do some nostalgic digging.

"I knew I had some old Pokemon cards at home," he said. "So I looked in the closet and noticed a binder ... I told my sergeant and lieutenant I had some cards I wanted to give [this boy], so the next day my partner and I went back to his house."

When Grotenrath rolled up with a binder full of original Pokemon cards, Bryce was beyond surprised.

"I was, number one, excited," Bryce said. "I didn't think he was going to give them to me. It's been really exciting."

The two generations of Pokemon gamers sat and admired the cards, and when they parted, they did so as new friends.

"He was grinning from cheek to cheek," Grotenrath said. "He said he had two uncles who were Cleveland police officers as well...and he told his mom he has a brand-new favorite officer."

For all the Pokemon lovers clamoring to know how valuable -- monetarily and otherwise -- Grotenrath's collection is, he says he's not really sure.

"I know I have a couple of holographics and first editions in there," he says.

Grotenrath shared a picture of the impromptu card exchange with some Facebook friends, and said his act of kindness is all in a day's work.

"Anything we can do to put a smile on a citizens face, is a job well done in our book," he wrote.

In the photo, Grotenrath's badge is covered in observance of National Police Week.