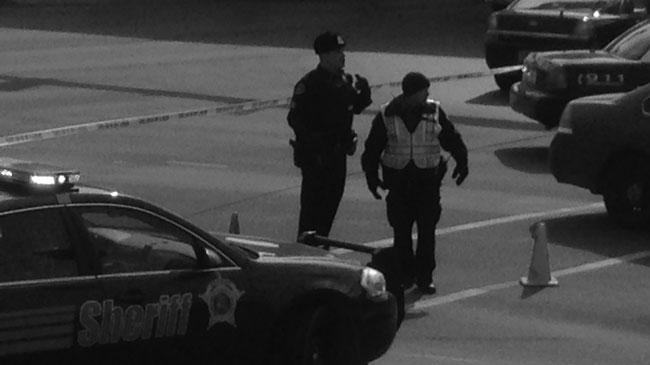 UPDATE:  Large police presence on Howell Avenue was due to a deputy attempting a traffic stop on a vehicle with expired plates that was driving through a motel parking lot on Howell Avenue around 10:15 AM on Thursday.

According to the Milwaukee County Sheriff's Department, the vehicle fled, and struck the deputy’s vehicle on Howell and Grange avenues.

Two male suspects jumped from the vehicle.  One subject reached in his waistband as the deputy approached, causing the deputy to fear for his life, according to Milwaukee County Sheriff's Department.

The deputy that fired his gun, 46-years-old, with 23 years of service. This occurred when the subject who displayed a weapon and fled, leaving behind a firearm.

The second subject ran in another direction, where another deputy arriving to assist jumped from his vehicle, and drew his weapon when the subject reached for a weapon.  The subject dropped a handgun.

The deputy ordered the man to the ground, and he was arrested at the scene.

A perimeter was set up and a search conducted by Milwaukee County Sheriff's Office, Milwaukee Police Department, and US Marshals for driver of the vehicle, who left his license behind in the car.  He was apprehended earlier this afternoon by the US Marshals Task Force when he tried to return to his home.

State Patrol assisted with freeway patrol while deputies were diverted to the scene of the search.

The driver, a 26-year-old Milwaukee man, faces charges of Felon in Possession of a Firearm (FIPOF), Possession with Intent to Deliver/Heroin/PTAC, and first Degree Recklessly Endangering Safety.  If convicted, he faces up to 40 years in prison.  He had two warrants out for his arrest – felony VOPs for first Degree Recklessly Endangering Safety Causing Injury, and for Armed Robbery.

ORIGINAL: There is a large police presence near Milwaukee's Mitchell International Airport in the area of West Grange Avenue and South Howell Avenue.

WIS 38 southbound is closed at Joseph M. Hutsteiner Drive because of a police incident.

The Milwaukee County Sheriff's Department and Milwaukee Police are on the scene.

Several officers are looking into a silver car.

K-9 units are searching the area.

According to a representative of Mitchell International Airport, Operations at Mitchell International Airport are not affected by the current police situation.  Due to the fact that police have closed southbound Howell Ave, Airport officials recommend that travelers use the airport spur rather than Howell to get to General Mitchell.  Bus travelers may experience some delays but they are able to get to the airport.

Sources said the incident started at Motel 6 there was a brief pursuit which ended at the Clarion Motel at which time shots were fired at a deputy and the shots hit his car.