Officer Finds Calling on One of LAPD's Hardest Beats 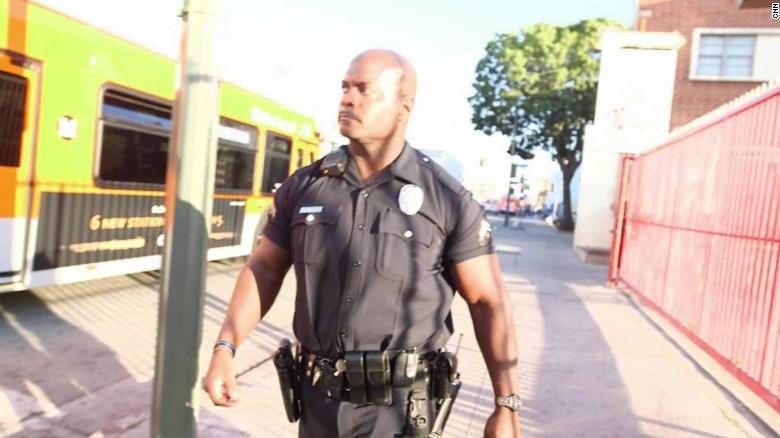 Los Angeles (CNN) Senior Officer Deon Joseph has become part of the fabric of one of America's last Skid Rows.

Just past the glittering high rises steadily jutting up in the heart of downtown Los Angeles, a mass of tents and people huddle across 50 city blocks. Hundreds of people here live even the most private moments of life out in the open.

"It's a human tragedy," says Joseph, an officer at the Los Angeles Police Department.

When Joseph walks the beat, you can't miss him. At a hulking 255 pounds, he walks like he's chasing a fire, but stops every three or four steps because someone yells out his name.

"I don't care if I'm talking to the President. If someone out here is talking to me, I have to respond because they have been ignored by society for too long. That won't be me," Joseph says.

For the most part, police officers are not popular here.

Spend just a few minutes on any given street and you will see people smoking up, shooting up, urinating, defecating, fighting or showing signs of severe mental illness.

"It is a predator's paradise. They are attracted to this place. They often target the mentally ill, some of whom are nonverbal, others who believe they are Santa Claus and no one is going to believe a word they say," Joseph says.

You will also see people just trying to get by after a bout of rough luck, like the woman known as "Mama Mo." She screams with joy at the sight of Joseph.

"Me and my kids got here from Georgia, and we were homeless. We were in the tent literally and we were sleeping on the streets," she says.

Then she met Joseph.

"Without him I wouldn't have the life that I have right now," she says, before turning around and giving Joseph a tight hug. "He's a wonderful man," she says through tears. "He's just an awesome man."

Joseph helped her find resources, including a home. He also showed her the kind of tough love that he could have been despised for.

"He put my fiance in prison. By putting him in prison, he saved his life," she says. "I love this man. I have the most respect for Officer Joseph. He treats us like human beings, not sh**, excuse me, like some others," she says.

Joseph lives for these moments of triumph, but he says he comes back to work everyday to fight for the ones still struggling.

This is his 18th year on one of the hardest beats at the Los Angeles Police Department. Joseph grew up in Long Beach and Los Angeles. He is the twin son of parents who raised 41 foster children. His father taught him not to judge others, and Joseph took it all in.

But he also grew up thinking police were more of a problem than a help in the black community. He grew up in the era of Rodney King, and the police beating that played out on television. The subsequent riots that followed are seared in his mind.

"My favorite rap groups were NWA and Public Enemy," Joseph says. "Yes, FTP was playing on my tape deck when I'm driving my Nissan Sentra back in the day."

Then one day, he became an LAPD officer.

"After business crashed after the riots, I needed a job. We were broke. I put my name in many hats, and someone suggested the LAPD. I prayed for all the other jobs to call me first, but none of them did. The only one that called was the LAPD," he says.

He took the job and lost friends over it. But he found his calling three years in when he got the Skid Row beat.

"When I first got there, it was horrible -- you'd have people walking into the station with their intestines hanging out, arms broken backward, black eyes," he says. "And they didn't want a police report, they just wanted to hide from their attackers."

As he walks the streets, he tells the stories of people he was pulling for, people who didn't make it.

"A woman who lived right there had finally gotten off drugs. She was so proud. She came back down here to show people she could change. I begged her not to. Do you know what happened? A drug dealer blew crack cocaine smoke into her face. She overdosed six times over there."