Ofc. Baranowski Released from Hospital Following his Shooting in Milwaukee 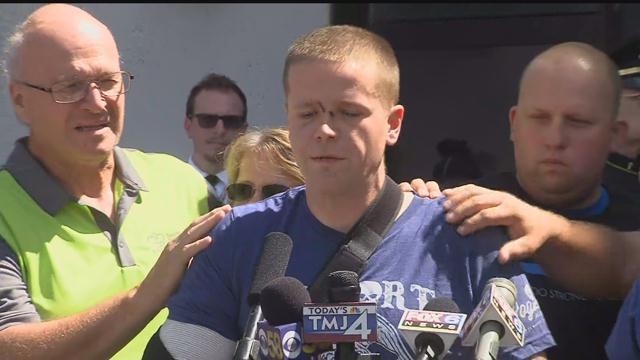 A huge police presence surrounded Froedert Hospital Wednesday morning but not for any disturbance.

Just before Noon Milwaukee Police Officer Brandon Baranowski was released from the hospital after getting shot by a suspect multiple times early Sunday morning.

Hundreds of officers lined the streets to support the man - emerging with one arm in a sling, the other arm waving to the crowd. Baranowski smiled at fellow officers after giving an emotional speech of appreciation.

"I want to express my thanks to the community, law enforcement partners, and all those that have given my family the support and prayers and well wishes during this difficult time," Ofc. Baranowski said.

Supporters handed out t-shirts in the parking lot printed with the message: "A line to strong to be broken". Nearby, Baranowski's father talked about what that support and empathy meant after learning of his son's shooting.

"You have no feeling. Nobody understands what we go through. You never know if he's going to come home at one time. You just don't understand. You dread that phone call. That phone call came at 3 o'clock in the morning. I don't wish that on anybody," Michael Baranowski, Brandon's father, said.

"The best way I can encapsulate it is we'd so much rather do this at a hospital than at a church," Milwaukee Police Chief Ed Flynn said.

"And we've seen too many hand salute outside of churches recently. It's nice to see a hand salute followed by a round of applause for an officer who survived an assault," Chief Flynn said.

"I have a long road to recovery ahead of me but look forward to rejoining my police family to serve and protect the citizens of Milwaukee. I can't thank you enough for everything," Baranowski said.

Officer Baranowski's father said his son's surgery on his arm when extremely smooth and thanked staff at the hospital.

Chief Flynn also credited the officer's body armor for saving him in this situation.