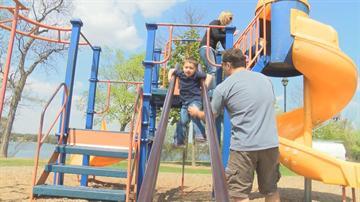 OCONOMOWOC -- Sundays in the park keep grandmother Linda Wolfert on her toes.

\"Every day is a danger with [the children],\" Wolfert said.

Soon, guns might be allowed there.  The city council is considering changing an ordinance that had banned open carry in parks after someone photographed a man in the park with a gun on his belt.

\"I guess because it's a city park, they're trying to say, well, public places, they can carry it,\" Wolfert said.  \"But, I know, privately, it's not allowed in schools.  Those are public schools.\"

\"We have to go with what state law says, so we're just going to clean up the ordinance,\" Nold said.  He worries not changing the ordinance could lead to legal challenges.

\"It's a law, we have to follow the rules of the law and enforce things,\" Nold said.  \"We don't want to have lawsuits.  That isn't productive for anybody.\"

\"As long as they're being responsible and safe with the firearm, I absolutely support it,\" father Jake Steingraeber said.

Steingraeber is a concealed carry permit holder.  He hopes the city moves forward with the change.

\"It makes me actually feel safer to know that responsible citizens are going to be able to protect us should the bad guys want to harm our little kids,\" Steingraeber said.

\"They create this park for family enjoyment and when you're bringing loaded weapons, that's just one more thing for parents and grandparents and families to worry about,\" Wolfert said.

The city council will take up a first reading of the change Tuesday night at 7:30 at City Hall.  They encourage anyone with an opinion on this to show up for the public comment session.  If approved two weeks later after a second reading, the ordinance would become law.