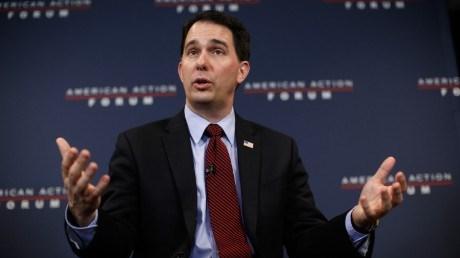 (CNN) President Barack Obama swatted away as \"foolish\" pledges from would-be 2016 presidential candidates to undo the nuclear deal being finalized with Iran if elected.

Obama was responding to Wisconsin Gov. Scott Walker who vowed last week to pull the U.S. out of a nuclear deal with Iran on day one of his presidency -- that is, if he decides to run and is elected. Walker is near the top of recent polling among potential Republican presidential contenders.

\"It would be a foolish approach to take, and, you know, perhaps Mr. Walker, after he's taken some time to bone up on foreign policy, will feel the same way,\" Obama said in an interview with NPR published Tuesday.

Former Texas Gov. Rick Perry, also a potential GOP contender, took the same position as Walker on Monday, swearing to \"invalidate\" the Iran accord as \"one of my first actions in office\" if he were elected President.

But Obama said he's confident his successor won't pull the U.S. out of an international agreement with Iran that involves not just the U.S., but five top world powers -- the four other members of the U.N. Security Council and Germany.

Reversing that precedent, Obama said, would \"embolden our enemies\" and prove problematic for the U.S.'s relations with its allies.

Republicans and some Democrats in Congress are calling for congressional oversight over an eventual deal with Iran and the Senate is expected to vote on a bill that would require Obama to run a deal through Congress. But Obama has been insistent that the executive branch has the power to reach the agreement alone and has resisted the calls from Congress.

Obama pointed out that the \"majority of agreements that we enter into around the world\" are not ratified by Congress.

A vote in Congress on Obama's Iran deal could doom the deal with Iran. Republicans in Congress, who vehemently oppose the negotiated framework agreement, hold the majority in both chambers of Congress.