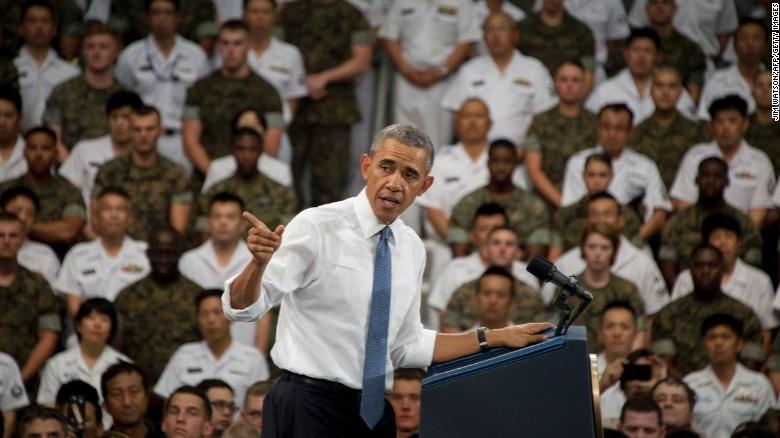 Hiroshima (CNN)President Obama's Air Force One has landed at Iwakuni Marine Air Station, ahead of a historic visit to Hiroshima, the first by a sitting U.S. President to the site of the world's first atomic bombing."This afternoon I will visit Hiroshima," Obama said at the base.

"This is an opportunity to honor the memory of all those who were lost in World War II. It's a chance to pursue peace and security, a world where nuclear weapons would no longer be necessary. And it's a testament to how even the most painful divides can be bridged."The president, who is not expected to apologize for the American action to hasten the end of World War II, previously said he would stress the "very real risks" of nuclear weapons.

Obama's visit to the site of the devastation that left tens of thousands dead was at least six years in the making inside the White House.

Japanese officials had initially discouraged the President from coming, but the final ground was paved by Secretary of State John Kerry, who visited the memorial and museum in April and impressed the Japanese with his remarks.Obama is expected to meet some survivors of the blast, most of whom were young children at the time their city was destroyed and at least 140,000 lives were lost.

Officials say Obama won't apologize for the decision to use an atomic bomb however. Nor will Obama say sorry for bombing of Nagasaki days later, where tens of thousands more died.

Such an apology would be highly controversial in the U.S. and in countries like China and Korea, which suffered the brunt of Japanese aggression and atrocities during the war.

Even as Obama planned his visit, families of the tens of thousands of Koreans who were killed in Hiroshima and Nagasaki demanded separate recognition from the American president.

Obama said Thursday he hoped to mark Hiroshima as a history-altering moment -- the U.S. is the only country to have ever used a nuclear bomb -- that humanity must avoid repeating.

"The dropping of the atomic bomb, the ushering in of nuclear weapons, was an inflection point in modern history," Obama said during a news conference at the G-7 Summit in Japan.Obama further hopes his appearance at the site will serve to reinforce his bid to reduce global stockpiles of nuclear weapons, an effort that's had only moderate strides after seven years in office.

While he successfully negotiated a deal for Iran to curb its nuclear program, North Korea only seems more intent on ramping up its own. And Obama has been accused of hypocrisy for his proposed trillion-dollar overhaul of American's own nuclear weapons program.

Why Obama decided to go to Hiroshima

Ahead of his visit to Hiroshima, Obama visited Marine Corps Air Station Iwakuni to meet with members of the U.S. military, amid long-simmering resentments in Japan over the U.S. military presence in the country.