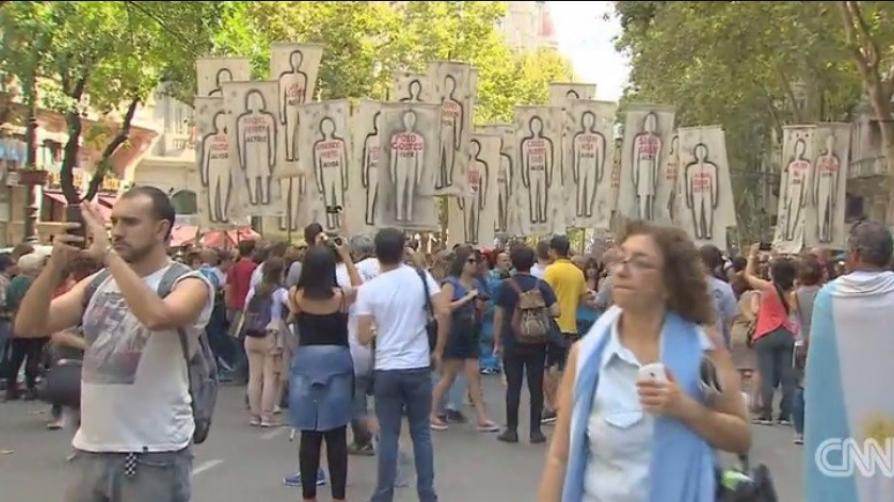 (CNN) Speaking in Argentina Thursday on a painful anniversary of government-sponsored killings, President Barack Obama conceded that the U.S. had been slow to condemn the atrocity and offered to shine new light on the era.

"Democracies have to have the courage to acknowledge when we don't live up to the ideals that we stand for. We've been slow to speak out for human rights and that was the case here," Obama said after viewing a memorial park for victims of the "Dirty War," a military-led assault on leftists during the 1970s and 80s.

His remarks came on a day of widespread protests in Buenos Aires. Some of the demonstrators said Obama's state visit to Argentina was overshadowing an important moment to reflect and remember the nearly 30,000 victims of the dark chapter.

And they objected to the American role in the conflict, which has remained unclear in the decades since the killings ended.

Thousands of peaceful marchers -- many born after the tumultuous Dirty War period -- began in the Plaza del Congreso Thursday and moved east to the Plaza de Mayo, where mothers and grandmothers of children "disappeared" during the war hold a regular vigil.

The demonstrators chanted "nunca mas," the "never again" message that Obama referenced himself during his morning statement. But many also displayed anti-American sentiments, including messages telling Obama to return home.

"We want to remember those years and the fights and the 30,000 activists that were disappeared," said Julia Detitto, a protester in her early 20s. "The U.S. government had to do with that and it is not innocent that he is here right now."

"We don't want him here in Argentina," she said. "His presence here is indicating this new kind of relationship with Mauricio Macri."

Macri is a center-right politician who replaces years of leftist leaders. Many of those organizing and participating in the marches are from the left and object to his policy platform, which they see Obama's visit as endorsing.

"All that they can agree (on) goes against the wishes and the desires of the Argentinian people, in economic terms, in social terms, in all the advances that there have been in the last decade in Argentina," she said. "We don't want that. That is why we want him out of here."

Obama and his family left the capital during the height of the protests, decamping to the Patagonian resort of Bariloche.

But before he left, Obama pledged to declassify additional U.S. military documents related to the "Dirty War." What those documents contain has until now remained unknown, and the President refused to speculate on their content at a news conference Wednesday.

The U.S. is known to have supported the military junta that led the rampage, which included killings and forced "disappearances." But how involved the U.S. was in the campaign is still secret.

"There's been controversy about the policies of the United States early in those dark days, and the United States, when it reflects on what happened here, has to examine its own policies as well and its own past," Obama said. "Democracies have to have the courage to acknowledge when we don't live up to the ideals that we stand for. We've been slow to speak out for human rights and that was the case here."

After tossing a bunch of white roses into the La Plata river -- a traditional sign of remembrance at the site -- with Argentine President Mauricio Macri, Obama said that owning up to a difficult past was important for reconciliation.

"It takes courage for a society to address uncomfortable truths about the darker parts of its past," Obama said. "Confronting crimes committed by our own leaders, by our own people -- that can be divisive and frustrating, but it's essential to moving forward, to building a peaceful and prosperous future in a country that respects the rights of all of its citizens."

Macri praised the commitment to transparency, and said no country should stand by in the face of human rights violations.

"This calls upon us not to be just passive onlookers of any violation, as has often been the case at other times in the history of mankind," he said.