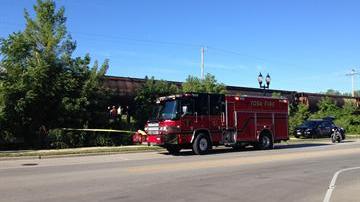 WAUWATOSA -- An Oak Creek man died after being hit by a train near 60th and State St. in an apparent suicide. The incident took place around 8:00 a.m. Thusday morning.

The Oak Creek resident was on the tracks as the Canadian pacific train was heading westbound into Wauwatosa. The area where the man was killed is supposed to be a quiet zone for trains in Wauwatosa. But the witnesses tell us the train was blowing it's horn repeatedly.  Canadian Pacific also confirms the crew was using the horn to alert the man on the tracks.  The man didn't get out of the way and was hit.

Authorities blocked off an area under one of the cars.  They focused their investigation in that area as well.  The Milwaukee County Medical Examiner came on scene and took the body away.

Many people we spoke to said even though this is a quiet zone in Wauwatosa, trains still use horns.  Because of that, they say it's nearly impossible to not hear it.

\"It was laying on his horn for a good 30 seconds then you could hear the brakes locked up,\" Andy Schalk said.  \"Once they showed up it wasn't too much of a sense of urgency they just kind a have been assessing the situation there.\"

An 11-year-old boy was hit and killed by a train just a few blocks west of where this happened in 2012.