MILWAUKEE (CBS 58) -- A deputy injured after being pinned by a traffic signboard Tuesday night has been identified as a 23-year-old man with nearly two years with the agency, according to a news conference Wednesday.

MILWAUKEE (CBS 58) -- A Milwaukee County sheriff’s deputy is recovering from serious injuries after a semi crash caused a downed traffic signboard to fall on him on the highway last night.

It happened in Oak Creek near the I-41 northbound at Drexel Avenue.

According to the Milwaukee County Sheriff’s Office, an initial semi-truck crash set off a chain reaction of incidents.

Around 10 p.m. Tuesday night, sheriff's deputies responded to a crash on I-41 northbound near Drexel for a semi that drove through a construction lane closure and into an electronic signboard.

It was hit so hard, the signboard was left hanging into the southbound lane, so the responding deputy tried to pull it out of the way of traffic.

However, while he was moving it, the trailer of another oncoming semi hit the signboard, causing it to fall onto the deputy and seriously injuring him.

Some good Samaritans acted quickly, saying they saw the deputy pinned underneath the heavy signboard and rushed to help.

A Racine man said he arrived just in time to see the officer’s legs pinned under the sign, and jumped right out of his car to help as much as he could, speaking to the officer to try and keep him conscious.

The semi that initially hit the sign was cited. The deputy was taken to a local hospital and is in serious, but stable condition.

MILWAUKEE (CBS 58) -- A Milwaukee County Sheriff's Office deputy was seriously injured after a semi hit a downed signboard near I-41 at Drexel Ave. around 10 p.m.

According to the Sheriff's Office, deputies were initially called on scene for a semi crash northbound on I-41 at Drexel Ave. The semi had breached a construction lane and crashed into an electronic signboard.

As the responding deputy shutdown one of the northbound lanes, another attempted to move a portion of the signboard hanging over the median in the southbound lane. A semi heading southbound then struck the signboard, which knocked the deputy to the ground and landed on top of him.

Another responding deputy and a Good Samaritan helped lift the signboard off the injured deputy and stabilized him for the responding EMS from the Oak Creek Fire Department. The deputy was conveyed to a local hospital for treatment and is currently in serious, but stable condition.

MCSO will be handling the initial crash investigation for the semi versus the signboard on the northbound side. The semi driver has a valid license and showed no signs of impairment. That driver was cited for Unreasonable Imprudent Speed/Failure to Control the Vehicle.

The Wisconsin State Patrol is handling the crash investigation for the injured deputy. This semi is described as a white Fed-Ex tractor-trailer with tandem trailers that continued southbound after striking the signboard.

MCSO is asking, if anyone who witnessed this crash or who has any information related to this incident is encouraged to call Sheriff Dispatch at 414-278-4788.
-----

MILWAUKEE (CBS 58) -- The Oak Creek Fire Department is responding to an accident on I-41/94 northbound at Rawson Avenue.

According to the Department of Transportation, a crash occurred around 10 p.m. on Tuesday, Dec. 10.

All northbound lanes are currently blocked.

According to a witness, a vehicle struck a large blinking sign while driving southbound and it flew over the temporary wall, striking an officer who was setting up orange barrels. 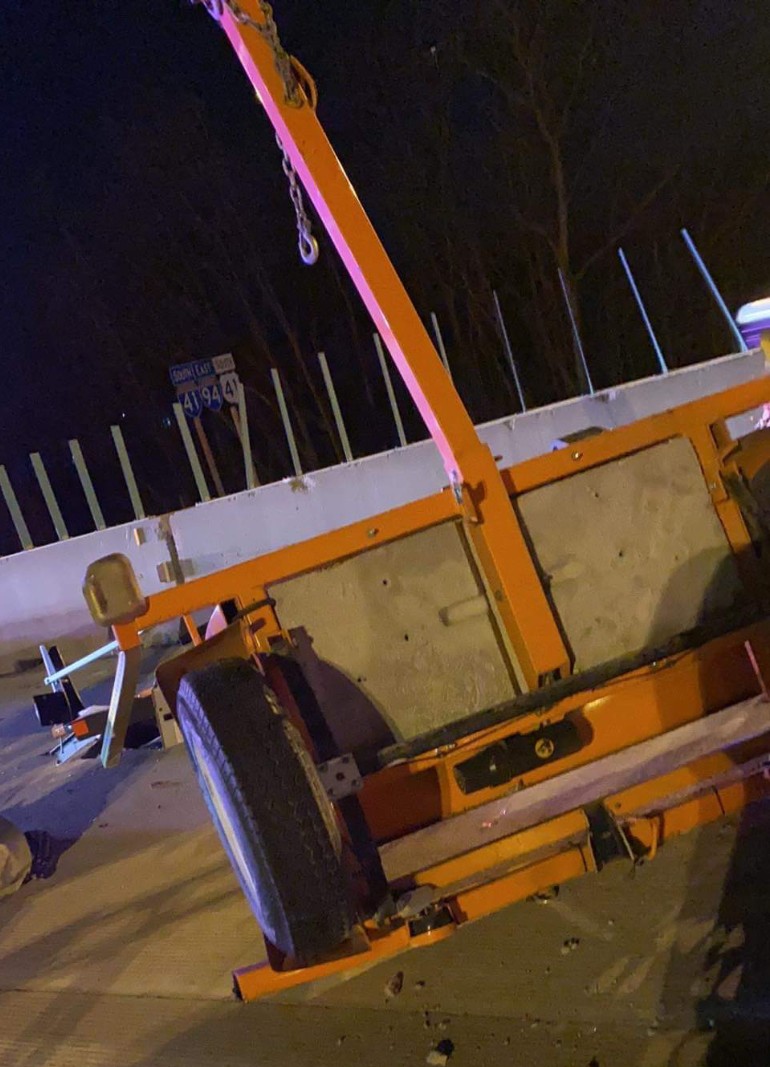 The witness said the officer's legs were pinned under the sign. He said the officer was conscious and talking, and several people helped keep him warm with blankets while waiting for an ambulance.