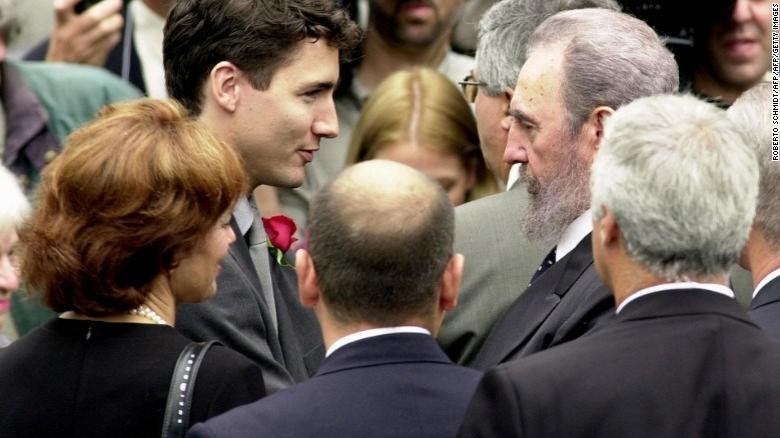 Commentators viewed Trudeau's statement as gushing and tone-deaf -- one that ignored the Cuban leader's human rights abuses and record of political oppression.It inspired parody tributes with the hashtag #TrudeauEulogies.

In his statement, Trudeau expressed "deep sorrow" after learning of "the death of Cuba's longest serving president."

"Fidel Castro was a larger than life leader who served his people for almost half a century. A legendary revolutionary and orator, Mr. Castro made significant improvements to the education and healthcare of his island nation.""While a controversial figure, both Mr. Castro's supporters and detractors recognized his tremendous dedication and love for the Cuban people who had a deep and lasting affection for 'el Comandante'."Cuba's relationship with Canada is friendlier than the one it shares with the United States. As the Embassy of Canada to Cuba says on its website, "Canada-Cuba relations can be traced back to the 18th century, when vessels from the Atlantic provinces of Canada traded codfish and beer for rum and sugar."

Canada and Cuba have maintained uninterrupted diplomatic relations ties since 1945. Canada is Cuba's largest source of tourists; Canadians visit Cuba like Americans visit Mexico. The two countries are trade partners and they engage in educational and cultural exchanges.

Trudeau added that his late father, Canadian Prime Minister Pierre Trudeau "was very proud to call him a friend." Castro had been an honorary pallbearer at his father's funeral.

The statement concluded: "We join the people of Cuba today in mourning the loss of this remarkable leader."

The prime minister's statement had Sen. Marco Rubio asking: Is this real?

"If this is a real statement from the PM of Canada it is shameful & embarrassing," he tweeted.

US Rep. Ileana Ros-Lehtinen, who fled Cuba with her family when she was 8 and became the first Cuban-American elected to Congress, was not impressed with Trudeau either.

"The only thing that Fidel has been successful in, has not been health nor education, or human rights or democracy, it's been holding onto power -- which is easy to do when you don't have elections," she said.

"Today we say goodbye to Mr. Mussolini, the former Italian prime minister best known for his competent train-management," tweeted a Canadian political commentator.Another person tweeted an image of a dark North Korea contrasted with a brightly lit South Korea and wrote: "Kim Jong il will always be remembered fondly for his leadership and contributions on climate change."And Joseph Stalin really helped with "eradication of obesity in Ukraine," another chimed in.