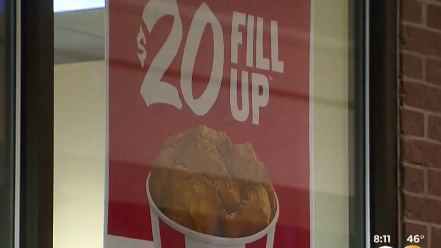 Anna Wurtzburger, 64, of Dutchess County, filed a $20 million lawsuit against the fast food chain, claiming KFC is fooling hungry families with their $20 bucket of chicken ad that depicts a bucket overflowing with food.

Wurtzburger claims she received less than half a bucket of chicken.

According to KFC, there are only 8 pieces of chicken in the bucket. But for Wurtzburger, that’s not the point.

“Its the principal of the matter,” Wurtzburger said. “Sometimes you gotta hit people where they feel it. For me, a corporation like that would be in the pocketbook.”

Wurtzburger said she was offered coupons for $70 in free chicken, but she refused.

KFC released a statement calling the claim “meritless.” The company said they plan to ask the courts to drop the case.