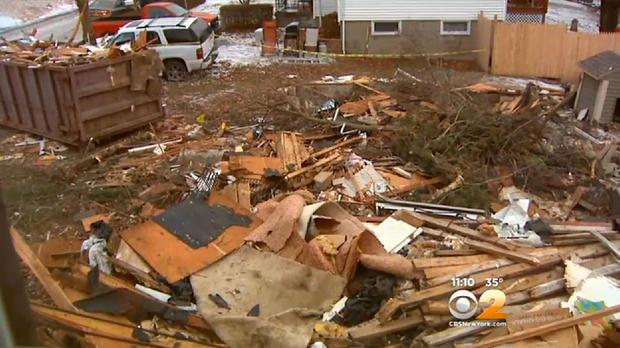 A crushed couch, a crumpled sign, and some clothing are all that were left after a man took a bulldozer to the home that he lived in, reports CBS New York.

As CBS2's Tony Aiello reported, there was one major problem with the man's demolition plan -- his wife, who was the registered owner, allegedly never knew about it.

A modest 900-square foot ranch home on Woodland Avenue in Middletown, New York has been reduced to a pile of rubble by the owner's husband 48-year-old James Rhein.

Neighbor Steve Belfiglio said Rhein rented an excavator on Monday and demolished the house and everything in it.

Records show the home is owned by Rhein's wife Diane Andryshak. Middletown police say she didn't know about or give permission for the demolition.

Rhein said the cops have it all wrong. CBS2 bumped into him while driving around Middletown.

\"Well, apparently, she told police you weren't supposed to tear down the house,\" Aiello told him.

Police said Rhein didn't file for any demolition permits and failed to notify utilities about his intended destruction. The electric and gas services had to be turned off by emergency crews.