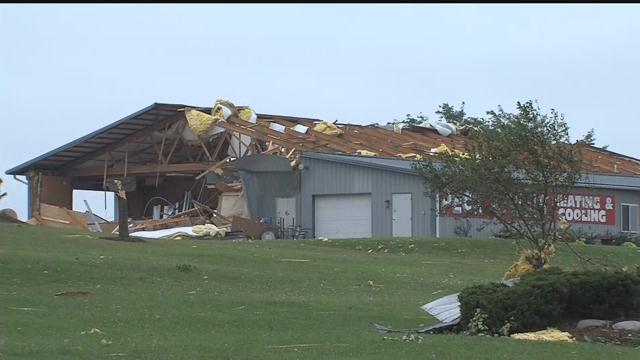 The National Weather Service has now confirmed a EF1 tornado touched down in Walworth County Tuesday night. The storm left significant damage in parts of the county.

\"There's two by fours thrown around like toothpicks,\" Amann described, \"The only good thing I can say is nobody was here. We had some guys [who] were working in the building lake and they, thank God, went home. We have no injuries and we talked to police last night and everybody was safe.\"

Many people looked at the damage and were relived no one was hurt.

\"Besides wow,\" Deanna Busch- who works for one of the businesses hit - said. \"A lot of friends in all of these buildings. We'll all pick up, we'll all help each other out and we'll all get going.\"

The National Weather Service (NWS) will be in Walworth County Wednesday investigating a possible tornado.

On Tuesday, 19 Wisconsin Counties were under a Tornado Watch. The NWS allowed all watches/warnings to expire at 10 p.m.

The storms left damage in Lake Geneva and the town of Lyons. According to the Walworth County Sheriff’s Office, Deputies and Firefighters responding to the area of Madaus Street at Hwy 120 found damage to many buildings in a small industrial park.

Hwy 120 is closed between Buckyby Road and Hwy 12 because of downed power lines. The road is expected to reopen at noon Wednesday.

No injuries or deaths have been reported at this time.