'Not My President's Day' protesters rally to oppose Trump 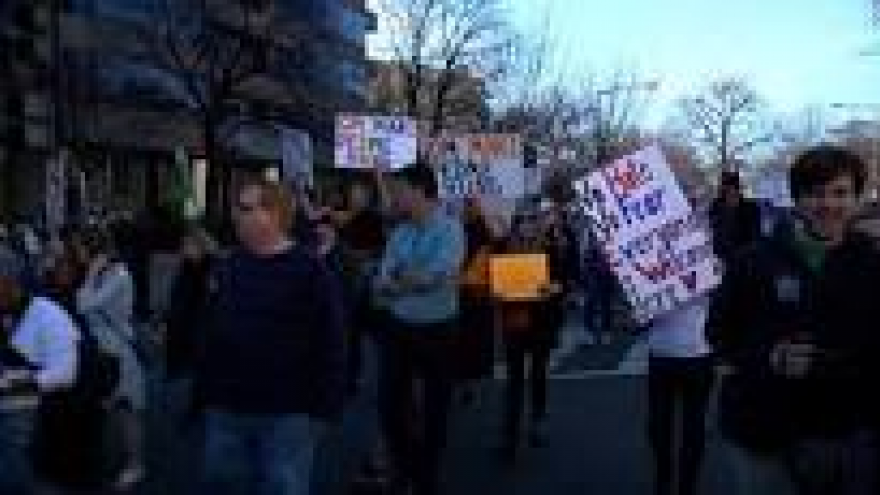 (CNN)Another week, another series of demonstrations by opponents of President Donald Trump.

Protesters in cities across the country took to the streets on Monday for "Not My President's Day" rallies with a strong anti-Trump message.

Olga Lexell, who was one of about 20 people who helped organize the events in Los Angeles, Chicago, and New York, said they were intended to show Trump there was widespread opposition to his policies and "ridiculous" executive orders.

"A lot of people are angry because he lost the popular vote and is ruling like somebody who won by a landslide," Lexell said.

In New York's Columbus Circle, protesters held signs with a simple message -- the word "No!" in different languages.

In addition, merchants sold T-shirts reading "Not My President" above smaller text reading "Elected but not chosen."

The rallies on Monday came amid what has been a fierce backlash from liberal grassroots groups to the Trump administration. That opposition has been voiced on a broad range of issues, including women's reproductive rights, immigration, and climate change.

New Jersey resident Janell Kastner joined the New York rally to protest the "gross incompetence" of President Trump, she said. She said she hopes the protest "further unifies those of us who do not adhere to Donald Trump's apparent lack of moral standing."Rachel McPhee, another rally attendee, told CNN that she hoped "that people keep coming together to resist this administration and to show Donald Trump how much opposition he has, as he did not win the popular vote and isn't representative of our whole country."

The protests took place in several dozen cities, according to the Not My President's Day Facebook page.

In Los Angeles, protesters gathered and held signs at City Hall, chanting "No ban, no wall!"

And in Atlanta, protesters included college students like Alyssa McNerney, who said she came out to highlight Republican party's hypocrisy.Lexell said the rallies were an attempt to "keep the momentum" between the widely attended Women's March last month and the upcoming Tax Day March on April 15.

Historically, protests against new presidents are not unusual, said David Meyer, a sociology professor at the University of California, Irvine, and author of "The Politics of Protest."

"What is unusual is the vigor, speed, size, and number of issues that they're challenging Trump on," Meyer said. "To have a sustained (protest), every weekend, every couple of days, and it's a different issue -- I've never seen anything like this before."

Monday's marches, and other similar rallies, do not have a clear and concise policy proposal, but Meyer said they still had a unifying message to the White House: "No"

"To fixate on a single coherent agenda is something that social movements aren't really good at," Meyer said. "It doesn't really matter that much, as long as there's some kind of message that comes out. ... Campaigns focused so far on "No" have done that."

Lexell said she thought the "No" message has already had an impact, and pointed to Republican politicians who have pushed back against Trump.

"I feel like we are getting that done," she said. "I feel like this whole movement in general has been successful."