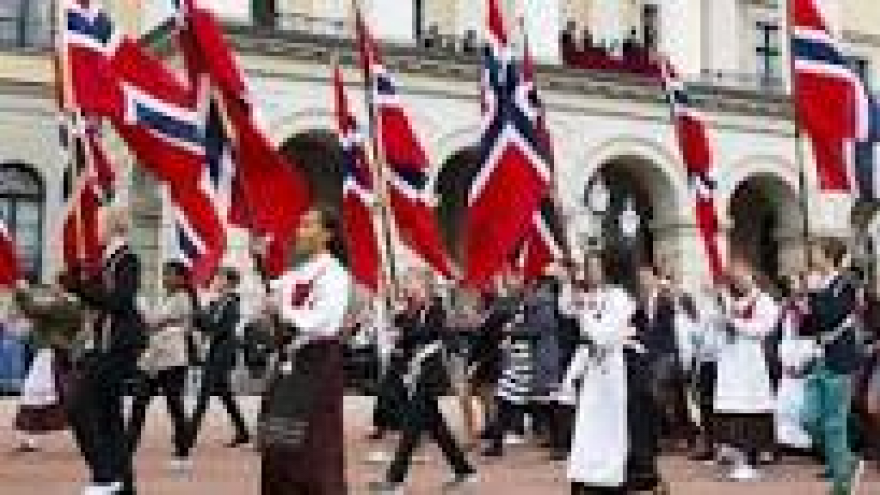 Norway has been judged to be the happiest country in the world, in the United Nations’ latest World Happiness Report, released Monday.

The Scandinavian nation, which was ranked fourth in last year’s report, jumped to the top this year on the basis of several key calculations for measuring social happiness, among them levels of caring, freedom to make life decisions, generosity, good governance, honesty, health and income.

Other factors by which 155 countries were measured in the annual World Happiness Report are: employment, income inequality, life expectancy, GDP per capita, public trust (i.e., a lack of corruption in government and business), and social support.

The United States, meanwhile, has slid in the rankings, from 13th place last year to 14.

The bottom five countries on the list were Rwanda, Syria, Tanzania, Burundi, and Central African Republic.

Among the notable findings in this year’s report:

Happiness is falling in America, thanks primarily to a drop in four key indicators -- access to social support, a sense of reduced personal freedom, lower donations, and a perceived increase in corruption -- rather than economic causes.

Unemployment, or the quality of the work they have, is a major factor in people’s happiness.  A rise in unemployment, in fact, affects the happiness of everyone, even those with jobs. And while higher pay clearly makes workers happier, work-life balance, job security, health and safety, social capital and autonomy are also predictive of a higher state of happiness on the job.

Despite China’s momentous rise in GDP over the past quarter-century, the subjective well-being of the Chinese has fallen, because of unemployment, changes in social safety nets, and periodic drops in life expectancy during that period.

In wealthier Western countries, mental health was considered a more important determinant in personal happiness than income, employment or physical health. In all countries, misery would be reduced more by eliminating depression and anxiety disorders than by reducing poverty, low education, unemployment, physical illness or a lack of social support.

Sluggish development in Africa following the end of colonial rule has led many Africans to express greater disappointment and lower levels of happiness compared to the aspirations expressed when they were first surveyed in the 1960s, though the report notes that Africans continue to express optimism about the future.

Jeffrey Sachs, director of the Sustainable Development Solutions Network, and a co-author of the report, says attention must be drawn to the importance of creating sound policy for what matters most to people: their well-being.

“As demonstrated by many countries, this report gives evidence that happiness is a result of creating strong social foundations,” Sachs said. “It’s time to build social trust and healthy lives, not guns or walls. Let’s hold our leaders to this fact.”