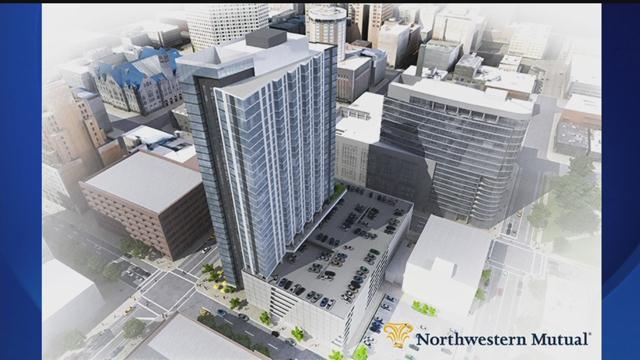 Northwestern Mutual is investing $100 million in a new building for its growing company.

Located at the corner of Van Buren and Mason, the current structure is set to come down in January. It will be replaced by a building 33 stories tall, room for 11-hundred parking spaces, more than 300 high-end apartments and retail businesses.

"This is an unprecedented amount of investment we're seeing in the heart of the city," said Milwaukee Mayor Tom Barrett.

Northwestern Mutual's new office tower, under construction now, is expected to be finished at the end of 2017.

The company needs more parking and tried to buy the garage at nearby O'Donnell Park, but were rejected by county supervisors.

This new project will benefit the city.

"I want them to continue to invest in our city so I'm going to work with them because it's a win-win situation," Barrett said. "They produce jobs, they produce a tax base."

The downtown landscape is shaping up to be a place for more people to live, work and play.

The 833 East office tower will connect to the U.S. Bank building. Next to it, the Downtown Transit Center site has been sold to build the Couture, a 44-story mixed-use skyscraper.

Barrett said challenge now is to expand that growth to neighborhoods in need.

"We've got a lot of people we need to get into the job pipeline," he said. "I'm hoping this is going to open up new opportunities for people who haven't had jobs so they can have opportunities to support their families."

Northwestern Mutual owns the property for the project. Construction is expected to begin in March, with completion in Spring 2018.