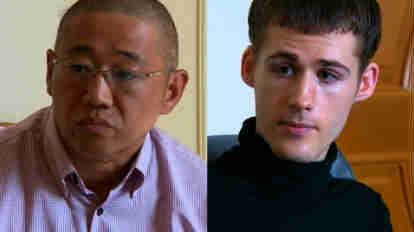 (CNN) -- Kenneth Bae and Matthew Todd Miller have been allowed to leave North Korea \"and are on their way home,\" the U.S. government announced Saturday, leaving no more Americans detained in the reclusive East Asian nation.

The pair were released after a rare, last-second trip by a top American official -- U.S. Director of National Intelligence James Clapper -- to Pyongyang as an envoy of President Barack Obama, a senior State Department official told CNN.

This came after North Korea contacted the U.S. government out of the blue and urged that the administration send a Cabinet-level official to Pyongyang to discuss the detained Americans, according to two sources close to the matter.

Clapper ended up canceling an event in New York on Wednesday as the trip was being arranged, an Obama administration official said. He went to Pyongyang \"prepared to listen\" on other issues, but that his sole focus was to bring Bae and Miller home, according to the same official.

U.S. officials said there was no \"quid pro quo\" for the men's release.

In a statement Saturday, Clapper's office said the U.S. government is facilitating the two men's return home, though it was not immediately clear when they would arrive back in the United States.

Obama himself also weighed in, expressing appreciation for Clapper's efforts \"on what was obviously a challenging mission\" and happiness that Bae and Miller will soon be home.

\"It's a wonderful day for them and their families,\" the President said.

The Americans' departure from North Korea comes less than a month after North Korea released Jeffrey Fowle, an Ohio man who spent five months in detention. North Korean authorities took Fowle into custody after he allegedly left a Bible at a club for foreign sailors.

Bae had been held since late 2012, and in April 2013 was sentenced to 15 years of hard labor for \"hostile acts\" against the North Korean government. North Korea claimed that Bae was part of a Christian plot to overthrow the regime.

The Lynwood, Washington, resident operated a China-based company specializing in tours of North Korea, according to family members, who have described him as a devout Christian.

Earlier this year, Bae -- who was transferred to a hospital last year -- told a Swedish diplomat that he was worried about his health.

Miller had been detained since April. According to the state-run Korean Central News Agency, he was convicted in September of committing \"acts hostile\" to North Korea and sentenced to six years of hard labor. He's been accused of tearing up his tourist visa and seeking asylum upon entry into North Korea.

In September, all three Americans then detained in North Korea -- Bae, Fowle and Miller -- talked with CNN in Pyongyang for about five minutes apiece.

All said they'd signed statements admitting their guilt, did not complain about their living conditions and asked for U.S. help.

The interviews -- which CNN learned about only after being shuttled on a van to a secret location -- were monitored and recorded by North Korean officials.

CNN could not independently confirm details of the three Americans' detention or other facts about their cases, in part because of the secrecy that defines much of North Korea's dealings with the world.

That includes the Communist nation's much-maligned quest to develop nuclear weapons, something that has put it at odds with the United States, South Korea and many other countries around the world. North Korea has been subject to stringent international sanctions aimed at curbing its nuclear aspirations.

The State Department official said that Bae and Miller's release is \"unrelated\" to other U.S. issues involving North Korea.

The United States welcomes the move, but if North Korea wants a better relationship with the world it needs to \"show it is serious and prepared to abide by its commitments, particularly concerning denuclearization,\" the official said. \"And they must take significant steps to improve their human rights record.\"

Yet Gordon Chang, the author of \"Nuclear Showdown: North Korea Takes On the World,\" opines something must have changed in Pyongyang's philosophy to justify releasing three American detainees in less than a month.

\"I think right now there is a charm offensive,\" Chang told CNN.

Bill Richardson, a former U.S. ambassador to the United Nations who tried to win Bae's release during a 2013 visit to North Korea, echoed that view, saying, \"They are sending a message to the United States that 'we're ready to talk.'\"

He added that no decision this big would have been made without the OK of Kim Jong Un, who took over as North Korea's absolute leader following the death of his father, Kim Jong Il, in 011.