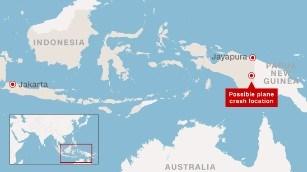 Jakarta, Indonesia (CNN)After trekking through mountain forests laced with fog, Indonesian rescue workers on Tuesday reached the crash site of a passenger plane that went missing at the weekend.

They found a grisly scene of bodies and debris strewn among the trees.

None of the 54 people on board the Trigana Air Service flight survived the disaster, said Heronimus Guru, the deputy director of operations for Indonesia's national search and rescue agency.

Helicopters are being deployed to the remote area in the eastern Indonesian province of Papua to begin the evacuation process, authorities said.

The airliner lost contact with air traffic control Sunday about half an hour into a short flight from Papua's provincial capital to a town in the mountains.

Search planes spotted debris on a mountainside Monday, but efforts to try to reach it on foot and by helicopter were suspended until Tuesday because of bad weather.