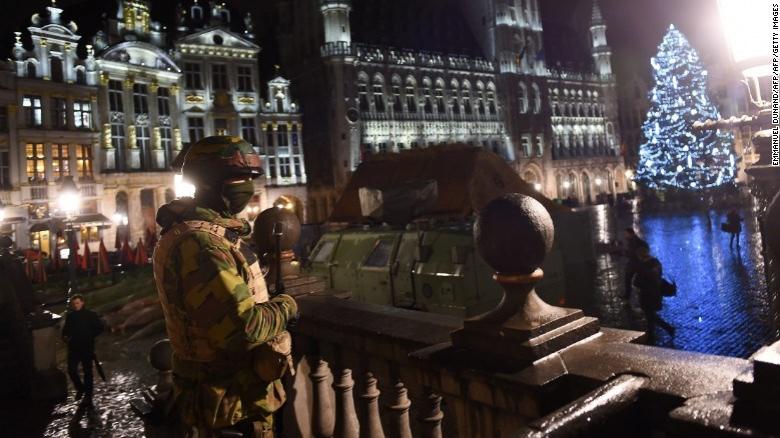 Brussels, Belgium (CNN)Brussels remained under extremely heavy security Monday after police carried out raids around the Belgian capital amid warnings of possible terrorist attacks similar to those that killed 130 people in Paris 10 days ago.

But authorities found no firearms or explosives in the raid, suggesting they hadn't defused the threat that has prompted the government to raise the terrorism alert to its highest level for Brussels.

The raids also didn't uncover Salah Abdeslam, a key suspect in the Nov. 13 attacks on Paris who fled to Belgium in the aftermath and remains on the loose.

As the work week begins in Brussels, a major European capital, schools and the subway remain closed, with only above-ground trams and buses operating. Soldiers and heavily armed police are out in force on the streets, and people have been warned to avoid large gatherings.Officials haven't detailed the "serious and imminent threat" announced late Friday, looming over a city that draws millions of visitors every year and houses key European Union institutions."We are talking of a threat of several individuals with weapons and explosives, to launch acts, maybe even in several places at once," Belgian Prime Minister Charles Michel said Saturday, a description with chilling echoes of the Paris attacks the week before.

Michel said Sunday evening that the terrorism alert level for Brussels would stay at 4, the highest level, going into Monday. The alert level for the rest of the nation remains unchanged at 3.

Authorities haven't disclosed the names of those arrested in the raids Sunday. A judge will decide Monday whether to keep them in custody, the prosecutor said.The tensions in Brussels highlight the city's strong connection to the Paris attacks, in which ISIS jihadists armed with assault rifles and suicide vests targeted restaurants, a rock concert and a sports stadium.Several of the men believed to have taken part in the attacks have strong ties to Brussels, notably its suburb of Molenbeek, which has a history of links with terrorism plots.

Abdeslam, who's on the run, and his brother, who blew himself up at a Paris cafe during the deadly rampage, both hailed from Molenbeek. So did Abdelhamid Abaaoud, the suspected ringleader of the attacks, who authorities say was killed in a police raid near Paris on Wednesday.

French authorities have said the Paris attacks were organized in Belgium, with the jihadists taking advantage of intelligence gaps and the absence of border controls between the two countries to slip into France undetected.Security measures remain tight in France, which has been under a state of emergency since the attacks.Children across the country were to have their bags searched at the front doors of schools Monday, while administrators were tasked with verifying the identities of everyone on school grounds, according to the Ministry of National Education website.

French President Francois Hollande, meanwhile, is trying to build a wider international coalition against ISIS, the Islamic extremist group behind the Paris atrocities.

He kicked off a busy week of diplomacy that's set to include separate meetings with the U.S. and Russian presidents by hosting British Prime Minister David Cameron in Paris.

They also paid their respects to victims of the attacks at the Bataclan concert hall, the site of the deadliest massacre on Nov. 13.Investigators are still trying to establish who did what during the wave of violence across the French capital.Questions have been raised about whether Abdeslam, 26, might have aborted part of the plan and laid low before calling acquaintances in Brussels to come pick him up.

Another of his brothers, Mohamed, who wasn't involved in the violence, said he believes Salah Abdeslam might have changed his mind at the last minute and decided not to go through with an attack.

"He probably saw or heard something that was not what he was expecting and he decided not to go through with what he wanted to do," Mohamed Abdeslam told Belgian broadcaster RTBF.

He reiterated a plea on behalf of his family for his brother to turn himself in.

"We prefer to see Salah in prison than in a cemetery," he said.French authorities are also still trying to identify all of the seven attackers who were killed on Nov. 13.

The French National Police posted a picture on its official Twitter account of a man it said was one of the three suicide bombers who detonated their suicide vests outside the Stade de France stadium.The photo is accompanied by an appeal to the public for information about the man, whom officials do not name.

They are also seeking information on another of the stadium bombers, who was found with a Syrian passport that's believed to be fake or doctored.

In another puzzle, investigators are analyzing the DNA of a third person who was killed during the major police raid Wednesday in the Paris suburb of Saint-Denis that targeted Abaaoud, the suspected ringleader.

Authorities have so far identified Abaaoud and his female cousin, Hasna Ait Boulahcen, as two of the dead in the clash with police. The DNA of the third person, who is believed to have detonated a suicide device, doesn't match anyone on police records, according to CNN affiliate BFMTV.