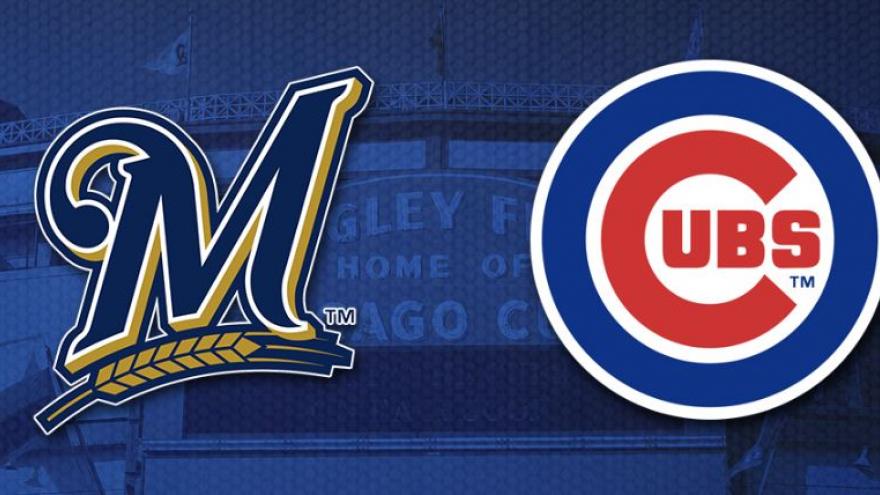 Granderson also got three hits and Mike Moustakas had a two-run single for Milwaukee, which took two of three from the first-place Cubs.

Josh Hader (6-1) struck out three in a scoreless eighth to get the win. Six Brewers pitchers combined to hold Chicago to six hits.

Kris Bryant had two hits and drove in the Cubs' lone run.

Granderson appeared to begin the game with his 48th career leadoff homer, but it was ruled a triple following an umpire review. Two batters later, Cain singled to drive in Granderson for the game's first run. Travis Shaw's sacrifice fly in the third gave the Brewers a 2-0 lead.

Milwaukee starter Chase Anderson allowed just two hits in four innings before being lifted for a pinch-hitter in the fifth. Chicago then scratched across a run in the bottom of the fifth against relievers Jacob Barnes and Corey Knebel.

Pinch-hitter Tommy La Stella, batting for starter Kyle Hendricks (11-11), led off with an infield single against Barnes and advanced to second on a throwing error by shortstop Hernan Perez. Three batters later, with La Stella on third, Bryant doubled off a 98 mph fastball from Knebel to make it 2-1.

The Brewers broke it open with three runs in the ninth. Granderson led off with a homer against Steve Cishek to make it 3-1. Later in the inning, Moustakas singled through the left side with the bases loaded to make it 5-1.

Cubs RHP Yu Darvish underwent an arthroscopic procedure on his right elbow to clean out loose debris, the team announced. Darvish was declared out for the season last month after an MRI revealed a stress reaction in the elbow. He recently visited noted orthopedic surgeon James Andrews for a second opinion, and the surgery was recommended.

The procedure, termed a debridement, was performed in Dallas by Texas Rangers physician Keith Meister.

The Cubs announced that Friday's game against the Reds has been moved to 7:05 p.m. It had been scheduled for 1:20 p.m.

Cubs: RHP Brandon Morrow (right biceps inflammation) threw a 35-pitch bullpen and his next step will be a simulated game this weekend. If all goes well, Morrow hopes to return to the active roster by the end of next week. . LHP Jon Lester (back spasms) played catch and appears ready to make his scheduled start Saturday after leaving Monday's game in the sixth inning.

Brewers: LHP Gio Gonzalez (8-11, 4.40 ERA) makes his second start with Milwaukee on Friday night in the opener of a home series against Pittsburgh. RHP Chris Archer (4-7, 4.56) pitches for the Pirates.