New York church to give away AR-15 semi-automatic rifle 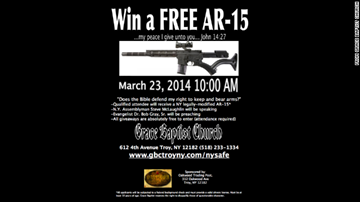 New York (CNN) -- An upstate New York church is giving new meaning to the biblical passage, \"My peace I give unto you.\"

In this case, it's a piece: an AR-15 semi-automatic rifle.

Grace Baptist Church in Troy -- about two and half hours north of Manhattan -- is giving away the semi-automatic rifle as part of a special event honoring hunters and gun owners later this month. The church website entices gun lovers with the words \"Win a Free AR-15\" followed by the New Testament line.

The holder of the winning ticket will receive an AR-15 modified for sale in New York state.

\"Does the Bible defend my right to keep and bear arms?\" says a promotional flier on the church website.

In a letter to his congregation, Pastor John Koletas said: \"Our country was built with the King James Bible and the gun.\"

New York Assemblyman Steve McLaughlin, a Republican, will speak at the service.

While the church venue for such an event may be unusual, McLaughlin said many upstate New York pastors carry guns. They are law-abiding, church-going citizens, he said.

\"It is not something that we would do,\" he said, \"but we have plenty of gun owners in the church, and it is our constitutional right to do so.\"

It is not uncommon for churches to host \"outdoorsmen\" events and give away guns, Collins said.

To qualify to win the AR-15, one has to be 18 or older, have a driver's license and be able to pass a background check to buy a gun, according to the pastor's letter.

The church reserves the right to disqualify anyone it deems of \"questionable character\" from winning the rifle, according to the letter.

Oakwood Trading Post, a local gun store, will conduct a background check on the winner before turning over the rifle, according to the store's owner, Brian Olesen.

The AR-15, valued at $700, was purchased by Grace Baptist and is being held at the gun store, Olesen said.

The semi-automatic rifle has a 10-round magazine capacity, and the trigger must be activated for every shot fired, Olesen said.

In 2013, a federal court ruled that a New York gun law restricting the sale of assault weapons and large-capacity magazines was constitutional.

The law was passed after the mass shooting at a Newtown, Connecticut, elementary school.

Armed with an AR-15 semi-automatic rifle, gunman Adam Lanza killed 20 first-graders and six school staff members at Sandy Hook Elementary School on December 14, 2012, before taking his own life. Earlier, he had killed his mother inside their home.