New way to test for pee in pools 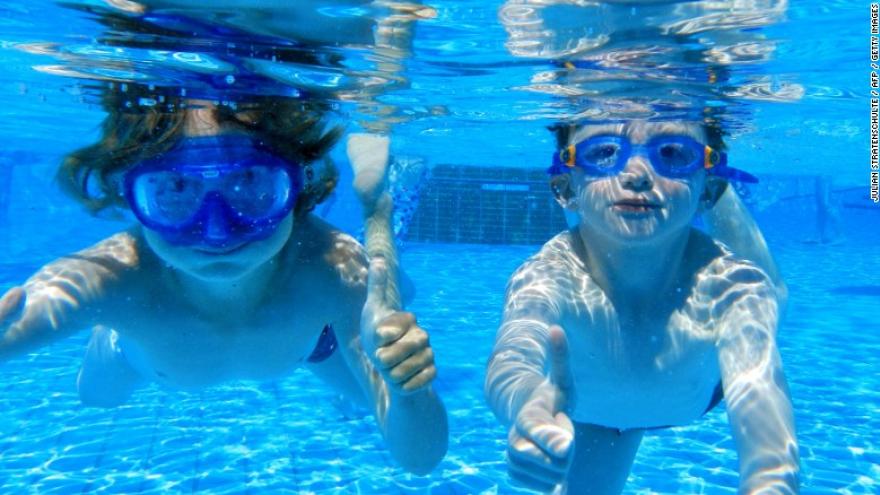 (CNN) One of the more unforgettable moments from the 2016 Rio Olympic Games was the sight of vibrant green water in one of the competitors' swimming pools which officials attributed to the addition of a cleaning chemical, hydrogen peroxide.

Quickly, the pool was drained and refilled, the clear blue restored.

Water quality is a health concern in all public pools, and although it won't turn the water green, urine can pose hazards to swimmers' health. Unfortunately, it's difficult to detect in the chlorinated water of a huge pool.

So how do you measure pee? Test for sweetness, University of Alberta chemists propose in research published this spring in the journal Environmental Science & Technology Letters.

Using an artificial sweetener as a proxy, they discovered that all of the 31 public pools and hot tubs they tested contained urine.

Though sterile, urine reacts with pool disinfectants, mostly chlorine, to form dangerous byproducts including trichloramine, which can irritate eyes, the researchers say.

Byproducts of swimmers' urine, feces and sweat mixing with chlorine can even build up in the air of indoor pools, triggering asthma attacks. The chemical reactions that create these byproducts also mean there's less chlorine left in the water to kill bacteria, such as E. coli.

Chemical reactions in pool water make it difficult to test for urine, so a proxy -- a stand-in substance -- is needed. Enter acesulfame potassium or Ace K, an artificial sweetener that is often used in processed foods and therefore widely consumed. After passing through the digestive tract, this sweetener is excreted in urine.

Xing-Fang Li, a professor in the University of Alberta's Division of Analytical and Environmental Toxicology, and her colleagues tested more than 250 samples from 31 pools and hot tubs in two (courteously unnamed) Canadian cities and compared them with samples of local tap water.

The concentration of sweetener in the pools and hot tubs ranged as high as 7,110 nanograms per liter, up to 570 times more than the levels found in tap water.

All the tested pools and hot tubs contained urine, Li and her team said. One 220,000-gallon pool contained 20 gallons of urine, while another pool half the size of the first contained 7 gallons.

Lindsay Blackstock, co-author of the study and a doctoral student of analytical and environmental toxicology at University of Alberta, said these results cannot be applied to all community pools. "The amount of urine deposited into each pool would be specific to a number of factors," said Blackstock. Factors include how many swimmers use the pool, the swimming hygiene practices of a community and how often the pool is refilled.

Blackstock recommends all swimmers rinse off and use the washroom before entering the swimming pool.

Canada is not alone in this concern. A 2010 US Centers for Disease Control and Prevention report found that one in 10 public pools in the United States doesn't have proper chlorine levels to meet its disinfectant standards.

Rick Sachleben, a member of the American Chemical Society who was not involved in the new study, said it was interesting. However, "I would ask how they are going to establish how much ACE-K people have consumed and therefore how the level of ACE compared the amount of urine present," he wrote in an email.

To make sure you're not about to take a dip in a dirty pool, Michele Hlavsa, chief of the CDC's Health Swimming Program, recommends using test strips from a pool supply or big box store to check the chlorine level. The CDC recommends pH levels of 7.2 to 7.8 and free chlorine concentration of at least 1 parts per million in pools and at least 3 parts per million in hot tubs/spas.

Even at these levels, though, chlorine does not destroy everything you wish to avoid while swimming. A parasite called cryptosporidium, which can cause diarrhea and can live up to 10 days in a chlorinated pool, is associated with 54% of the outbreaks of illness at pools and water parks, a 2015 CDC report found.

Sachleben, who also is a fellow in chemical development for Momenta Pharmaceuticals, said he does not frequent swimming pools, but it's not because of the pee.

"I just don't find hanging out at the pool something I enjoy. Much prefer a nice beach," Sachleben said.

"Let's face it," he added. "Ponds and the ocean are full of fish and other animal excrement, along with the decomposing bodies of the dead ones."