New Video: Inside massive pile up in Racine County 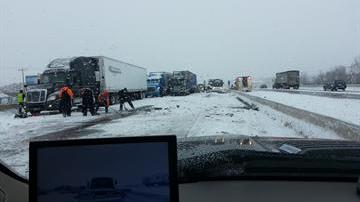 Adam Nelson and his family were in one of the many cars caught up in a massive pile up on I-94.

He took video of the carnage on the road.

Luckily, his car only suffered a dented license plate, but many other cars were destroyed.

Nelson said his car was almost hit by a jack knifing truck.

As of 3:30 p.m. Sunday, the RCSO said they responded to 60 accidents and about half were on the highway.

One person was killed in a crash.

They shutdown southbound lanes on the interstate until 4 p.m.

The road conditions were very poor with low visability and very slippery with ice present.