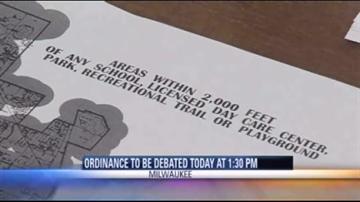 MILWAUKEE -- A controversial sex offender ordinance related to the placement of offenders in the city of Milwaukee is up for debate.

The proposed measure would place nearly half of the city's available housing units for convicted sex offenders in the same district.

Alderman Terry Witkowski represents the 13th District where a majority of the housing units for sex offenders would be placed.

He says it's important to regulate where sex offenders live, but disagrees with the plan, proposed by Alderman Tony Zielinski.

The plan creates a 2,000-foot buffer zone from schools and parks.

Witkowski says his district shouldn't be used as a dumping ground just because it has fewer schools than other aldermanic districts.

The Steering and Rules Committee takes up the matter at 1:30 p.m. today at City Hall.