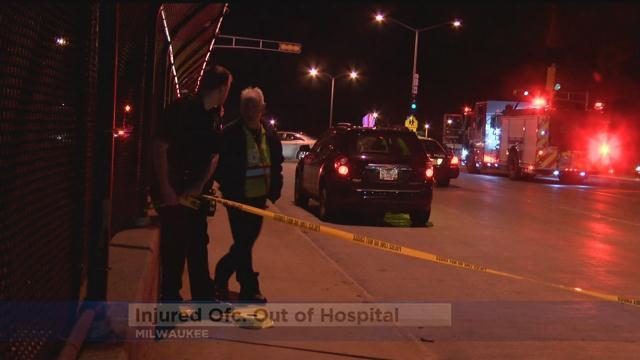 A 14 year veteran of the Milwaukee Police Department was shot Thursday night.

His vest stopped a bullet fired by an armed robbery suspect who refused to put down his gun.

The bullet left a hole in the 38 year old officer's vest and bad bruising on his chest.

He was responding to an armed robbery at O'Reilly Auto Parts near 76th and Mill Road when he saw a masked gunman running out of the business.

As they chased after him the robber fired.

Back up officers continued to the pursuit and were also fired upon.

They returned fire with deadly results.

The suspect was 38-year-old Burt Johnson.

His criminal record dates back to 1999 and includes armed robberies and burglary charges.  The state division of criminal investigation was on scene last night and will head the probe into the officers' actions.

A lot of the neighbors we spoke with say-they were outside when the suspect came running down Mill Road shooting at police officers.

Thursday night Alonso Low-Smith was visiting his aunt, who lives near 73rd and Mill.

He said he didn't realize how close he was to this dangerous situation.

“I was standing right there so I saw him literally just come across the street and run behind here,” said Low-Smith.

Terrifying is how Christine Willis' described the incident.

She was waiting for her son to come home when all of this was happening and she was afraid he would get caught up in the crossfire.

“Very scary because I was wondering where he was at,” said Willis.

Within minutes police caught Johnson in an alley, where two officers opened fire.

Neighbors are still on edge Friday after the incident.