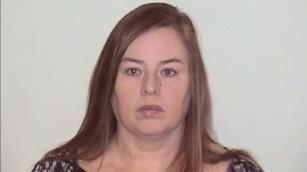 Melodie Gliniewicz, 51, is the widow of Fox Lake Police Lt. Joe Gliniewicz, who killed himself last year. Officials said he staged his suicide to appear he was killed in the line of duty while pursuing three suspects. The case prompted a massive manhunt for weeks until authorities unraveled the ruse.

A grand jury indicted Melodie Gliniewicz in January on six counts accusing her of participating in her husband's stealing of charitable funds. On Wednesday, grand jurors indicted her on new charges of using charitable funds for personal benefit, and three counts of conspiracy related to use of the funds and money laundering.These new charges are in addition to the ones listed in the January indictment, which accused her of money laundering and paying personal expenses with funds from the Fox Lake Police Explorer Post that had been headed by her late husband since 1987.

The new charges are lower class felonies than the previous charges, and they will not add to a potential sentence if she's convicted, Lake County State's Attorney's Office spokeswoman Cynthia Vargas said.

Melodie Gliniewicz is currently out of jail on a $5,000 bond, and those terms won't change, Vargas said.

Shortly before Joe Gliniewicz, 52, died, he radioed police dispatchers that he was chasing three male suspects at an abandoned cement factory.

Authorities concluded his shooting was self-inflicted after federal investigators in Quantico, Virginia, recovered text messages that Gliniewicz had deleted from his cell phone. In all, 6,500 pages of texts were reclaimed, authorities said.

Those text messages indicated an alleged embezzlement scheme in which Gliniewicz absconded with charitable funds from the Explorer Post, where he introduced hundreds of youngsters to potential careers in policing and the military.