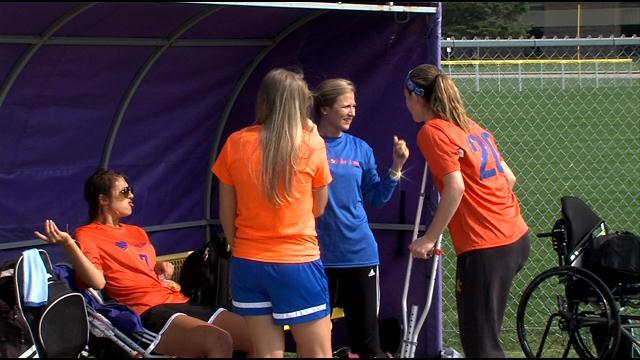 The New Berlin West versus New Berlin Eisenhower soccer match is a fierce rivalry every year.

\"It's always an emotional game,\" said Rachael May, Eisenhower captain.

But winning on this Wednesday afternoon isn't the only goal.

\"We practice everyday and the fact that she can't do that is so heartbreaking,\" continued May.

\"I know as one of the leaders of the team, we're just so proud of our team and the way they've supported Jana,\" added Andrea Zube, Eisenhower captain.

Jana Dodd is a freshman on the opposing team, New Berlin West. A fall at a soccer practice led her to being diagnosed with a condition called transverse myelitis. It paralyzed her, but she's learning to walk again with the help of crutches.

\"She has her bad days, but for the most part she's a real trooper,\" said her mom, Leslie Dodd. \"She just pushes through.\"

\"It's not something any high school kid would anticipate having to deal with,\" added West soccer coach Adam Bell.

But the athlete isn't dealing with it on her own, fellow competitors at Eisenhower have rallied around her, selling sweet treats and t-shirts in her favorite color.

In addition to that, all the money from concession stand sales will go to Jana's family to help pay for mounting medical expenses.

\"I cried,\" Leslie said. \"It was just a very nice gesture. Very wonderful for them to do this for us.\"

\"High school sports and competition are important,\" said Coach Bell. \"But at the same time, there's a human element as well.\"

\"We want to represent our school and our community and what we stand for, which is helping out someone when they need it,\" said Eisenhower captain Kelsey Thompson. \"We know we'd want them to do that for us.\"

There is no exact cause for the transverse myelitis. Leslie said she's unsure if her daughter will completely recover.

You can donate to Jana's Journey by clicking here, or, by contributing to a fund set up at Landmark Credit Union in New Berlin.