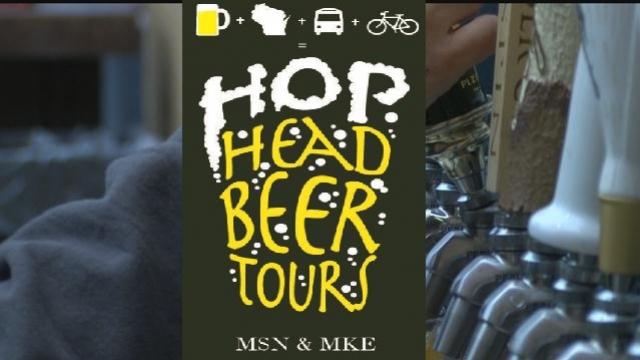 Hop Head Tours of Madison, WI has announced the expansion of their highly rated local tours of breweries, distilleries and wineries to the
Milwaukee area, according to a release from the company.

Anchoring their tours at the centrally located and famous Lakefront Brewery, Hop Head Tours will provide guests with an inside look at the blossoming craft beer and spirits scene. Their bus tours will also feature historic beer centric sites around the city detailing why Milwaukee was commonly known as the “Beer Capital of the World” during the 19th and 20th centuries. Bus and bike tours in Milwaukee will be hosted by knowledgeable and engaging Tour Ambassadors guiding their guests from stop to stop.

“I’m surprised that tours like ours haven’t already been running in Milwaukee for years!” says co-founder Justin Schmitz. “The Cream City is famous for their beer brewing heritage where four of the world’s ten biggest breweries once resided. Fast forward to now and we’ve heard of at least ten craft breweries and several distilleries that will open up this year to compliment an already solid foundation of existing, local craft breweries. It’s an exciting time to expand!” Schmitz summed up.

Hop Head Tours was founded in 2010 by three ambitious bartenders at the Great Dane Brewpub. They themselves wished that someone would get a bus and take them on a tour of breweries so they put their heads together, made a plan and took a leap. Now with two owners, Filipe Moreira and Justin Schmitz, Hop Head Tours offers regularly scheduled local bus and bike tours in Madison and motorcoach trips to such far flung locales as Michigan and Chicago.

Hop Head Tours plans to launch with Friday and Saturday bus tours by the beginning of June with an eye to expanding their tour itineraries and days offered to five days a week within a year. Tour pricing will range from $50-$75/person depending on the tour.