New Amtrak locomotives are being used in Wisconsin 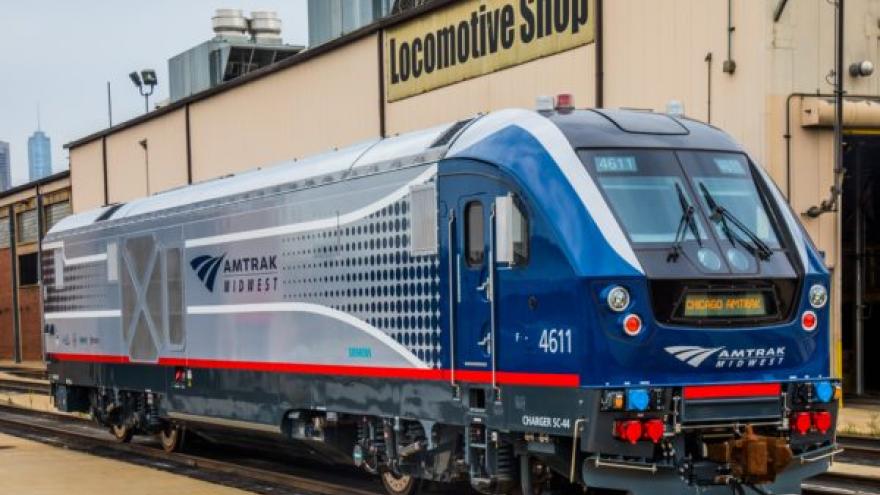 CHICAGO (CBS 58) – New locomotives are now serving Amtrak customers in Illinois and Wisconsin, with the U.S.-built, Midwest-powered, Amtrak-maintained units slated to operate on state-sponsored services in the region. These Siemens Charger locomotives will please customers with enhanced smoothness, speed capability and safety features – along with reduced exhaust emissions. They carry the new Amtrak MidwestSM logo to promote the five-state network of connecting trains with a robust reservations system, eTicketing and mobile apps; AmtrakConnectSM cellular-based Wi-Fi; and the Amtrak Guest Rewards® program.

After deliveries are completed, these 33 locomotives will be deployed from Chicago on trains that served more than 2.6 million Amtrak customers in the last year: Lincoln Service, Illini/Saluki and Illinois Zephyr/Carl Sandburg to and from Downstate Illinois; Hiawatha Service in Illinois and Wisconsin; Wolverine Service/Blue Water/Pere Marquette to and from Michigan; and Missouri River Runner between Kansas City and St. Louis. The first Amtrak Midwest locomotive was unveiled at a news conference today at Chicago Union Station.

“Our individual Amtrak Midwest routes are made even stronger by being part of a network of connecting trains, stations, and reservation systems, which are a product of our state partners working together under the Amtrak umbrella,” said Michael Franke, Amtrak Senior Director – State Contracts. “These locomotives will power the Amtrak Midwest brand, bringing even better service to our customers.”

“We are proud to have led the effort to bring these attractive, modern locomotives to Illinois and our other state partners,” said Randy Blankenhorn, Illinois Transportation Secretary. “Passenger rail customers will benefit the most by enjoying a ride that’s more reliable and more comfortable as they travel between our state’s great communities, institutions and attractions.”

“We look forward to the improved efficiency and reliability that the Siemens Charger locomotives bring to intercity passenger rail services across the Midwest,” said David Simon, Director of the Bureau of Transit, Local Roads, Railroads, and Harbors at the Wisconsin Department of Transportation.

“This procurement with partnering Midwest states has shown we can work together for a common goal,” said Tim Hoeffner, Director, Michigan Department of Transportation Office of Rail. “In the coming weeks, Michigan will begin the replacement of older engines with brand new, high-tech locomotives operating on all of our passenger rail corridors, which will complement our 110-mph service.”

“Missouri is proud to be a partner welcoming safer, cleaner, faster and better locomotives to the Amtrak Midwest fleet,” said Michelle Teel, Multimodal Operations Director for the Missouri Department of Transportation. “Missouri River Runner passengers will benefit from improved performance when the locomotives go into operation soon between St. Louis and Kansas City.”

“We’re building these locomotives in California, for the U.S., bringing the latest technologies to life for riders,” said Armin Kick, Siemens Mobility Vice President for Locomotives. “These are among the nation’s cleanest locomotives and we’re proud to have not only worked closely with Amtrak and the state DOTs to bring these to the Midwest, but also our robust chain of suppliers from across the country.”

Powered by a Midwest-made 4,400 horsepower Cummins QSK95 diesel engine, the locomotives will be able to operate at speeds up to 125 mph, with faster acceleration and braking for better on-time reliability. They meet the latest safety regulations and feature better traction for improved performance.

They also are the first higher-speed passenger locomotives to meet the highest federal environmental standards, meaning a 90 percent reduction in emissions and a reduction in fuel consumption of up to 16% compared to the previous locomotives.

Purchased through $216.5 million in federal funds, the locomotives are just one part of a larger effort to improve passenger rail service in Illinois and the Midwest.