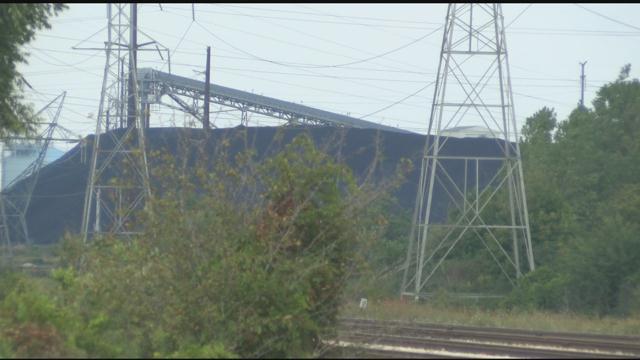 A Caledonia man is leading the charge against energy giant We Energies for putting lives at risk.

\"I was laying in the hospital and he asked me if he was going to die,\" said concerned resident Bill Pringle. \"And that really made me angry.\"

Pringle is talking about his then three-year-old son, who in 2013 was in the hospital for pneumonia. He blames the sickness on the Oak Creek coal-fired power plant.

Instead, Pringle said its coal dust. He claims the wind blows it around from the power plant, gets inside homes and even sticks to windows and decks.

The danger forced his family to move from the neighborhood.

\"My kids are on one-third of the medications they were a year ago,\" he said regarding their improved health.

But Pringle said he's talked to more than 200 people still living within three miles of the plant, who claim the harmful particulates gave them asthma, bronchitis and cancer.

\"We really don't have any evidence of that,\" said Brian Manthey, We Energies spokesperson. \"We don't believe coal dust has created health concerns.\"

Manthey admits wind will blow coal dust around and could land on property, but said the company cleans up any areas that test positive.

\"Over the last 10 years we've had 33 different residents call us and nine homes tested for coal dust,\" he said.

The company will soon expand its coal pile storage at the Oak Creek plant. To control increased dust, the DNR has imposed safety rules, such as a wind barrier.

Pringle said those measures will help, but vows to keep fighting the energy giant until it admits wrongdoing.

\"We want to breathe clean air and be healthy,\" he said.

An attorney representing a group of about 70 concerned homeowners has yet to file suit against the company. Meanwhile, We Energies said its working with the attorney to find the best way to test homes for coal dust.

Manthey said the company purchased about 20 homes for its expansion project.

A Racine County Eye report said the company requires homeowners to sign an agreement to not discuss those sales and also prohibits them from suing.

We Energies, however, said signing a liability waiver is standard procedure.