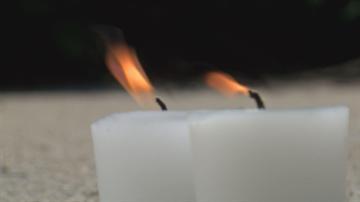 GLENDALE -- Lighting a makeshift memorial at the end of her driveway, Marvac Rizio wonders what exactly happened inside her neigbhor's home.

Around 2:15 Thursday afternoon, Glendale Police responded to reports of shots fired.  They found 20-year-old Robert Washington, Jr. and his 15-year-old brother wounded outside.  Police moved the 20-year-old to the Rizio's driveway because they didn't know who or where the  shooter was. Rizio was just coming home after running an errand.

Police found the victims' father, Robert Washington, Sr. inside his home and arrested him.  They  took the 15-year-old boy to Children's Hospital for treatment and released him, but Washington, Jr. died in the driveway.

\"I just saw them minutes before it happened and it looked fine to me,\" Rizio recalls.

Friday, people came and went from the Washington home, but the family declined to speak.  Rizio says the Washingtons are a quiet, respectful family that never showed signs of trouble.

Mark goes to Nicolet High School with the boy where they both play football.

Now, Mark's classmate and neighbor will recover -- wthout his brother -- possibly taken by his own father.

\"Hopefully justice is served,\" Marvac Rizio said.  \"Because the kids don't deserve this kind of violence.\"