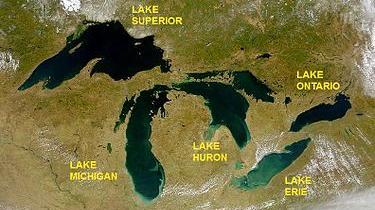 Near record water level rises in Lake Michigan boost levels to their highest mark in 17 years.  The latest observation of 579.8 feet is the highest level recorded since July of 1998.  In fact, for the last year all of the Great Lakes have been above their monthly average levels for the first time since the late 1990s.

A variety of factors cause seasonal and annual fluctuations in water elevations of the Great Lakes.  The most important factors are believed to be over-lake precipitation and over-lake evaporation.  Not surprisingly, the Great Lakes watershed has seen a net surplus in precipitation (frozen and liquid) during 2013 and 2014.  However, just as important, we've seen a dramatic decrease in evaporation due to extreme ice cover during our very cold winters.  Evaporation is usually at a peak during the winter months as cold, very dry continental air draws the moisture straight from the lakes.