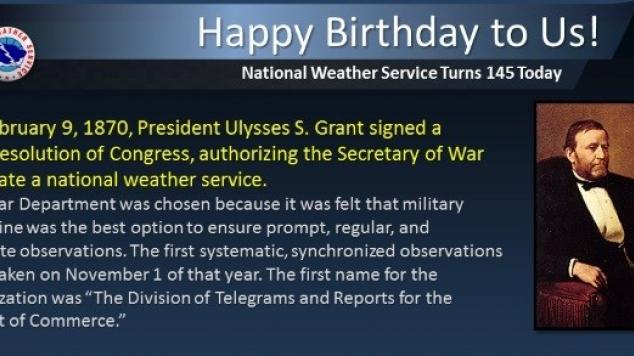 The National Weather Service celebrated another birthday on Monday!

The service got started February 9, 1870, when President Ulysses S. Grant signed a joint resolution of Congress authorizing the Secretary of War to create a National Weather Service. The feeling was that military discipline would best suit the goal of providing fast, regular and accurate weather observations.  The mission included taking meteorological observations at military stations and for giving notice on the Great Lakes and on the seacoast by magnetic telegraph and marine signals, of the approach and force of storms.

The first observations were taken by November of that year. The service later became a civilian agency known as the U.S. Weather Bureau on July 1, 1891, and its name changed to the National Weather Service when it was transferred under NOAA in 1970.

Here's a link with more on the history of the National Weather Service: http://www.nws.noaa.gov/pa/history/index.php