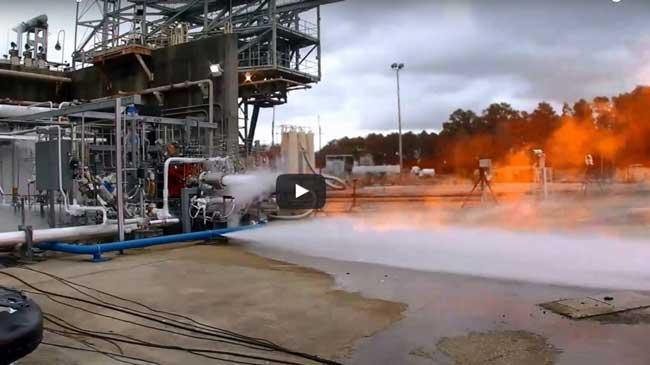 A NASA team moved a step closer to building a completely 3-D printed, high-performance rocket engine by manufacturing complex engine parts and test firing them together with cryogenic liquid hydrogen and oxygen to produce 20,000 pounds of thrust.

Seven tests were performed with the longest tests lasting 10 seconds. During the tests, the 3-D printed demonstrator engine experienced all the extreme environments inside a flight rocket engine where fuel is burned at greater than 6,000 degrees Fahrenheit (3,315 degrees Celsius) to produce thrust.

3-D printing, is a key technology for enhancing space vehicle designs and manufacturing and enabling more affordable exploration missions. The technology has the potential to influence spacecraft built for leaving Earth and spaceships and landers for visiting other destinations.

“We manufactured and then tested about 75 percent of the parts needed to build a 3-D printed rocket engine,” said Elizabeth Robertson, the project manager for the additively manufactured demonstrator engine at NASA’s Marshall Space Flight Center in Huntsville, Alabama. “By testing the turbopumps, injectors and valves together, we’ve shown that it would be possible to build a 3-D printed engine for multiple purposes such as landers, in-space propulsion or rocket engine upper stages.”

Over the last three years, the Marshall team has been working with various vendors to make 3-D printed parts, such as turbopumps and injectors, and test them individually.

The turbopump delivers the fuel in the form of liquid hydrogen cooled below 400 degrees Fahrenheit (-240 degrees Celsius). These tests were performed with cryogenic liquid hydrogen and liquid oxygen, propellants that are mainstays of spaceship propulsion systems.