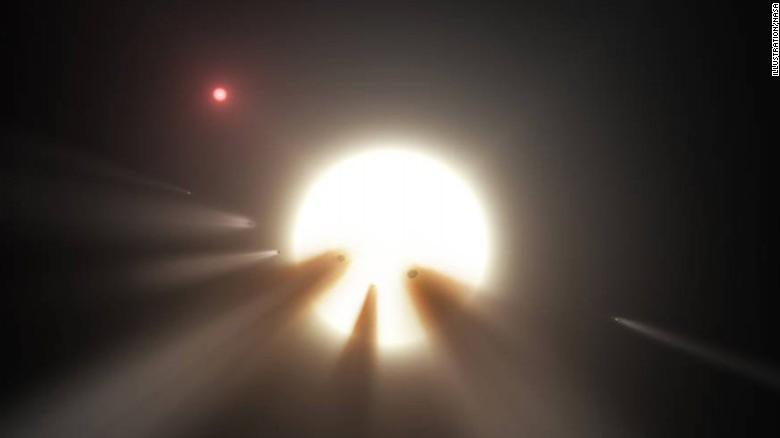 (CNN)An anomaly in deep space that has been the focus of speculation and observation for weeks over possible extraterrestrial life may have just been solved.

A research team from Iowa State University looked at data from NASA's Spitzer Space Telescope, and found that the strange dips in light, which were initially theorized to be possible structures, were likely a "swarm of comets."

The system, KIC 8462852, had been under scrutiny since its unusual light fluctuation was discovered by users of the online astronomy crowdsourcing site Planet Hunters. The group uses publicly available data gathered by NASA's Kepler Telescope, which has been tasked with finding Earth-like planets by searching for the periodic dimming of stars that might suggest such a planet is passing by.

But NASA says the Kepler Telescope only viewed the star in "visible light," and in this case, they searched by infrared light.

"It's possible that a family of comets is traveling on a very long, eccentric orbit around the star," NASA said in a statement. "At the head of the pack would be a very large comet, which would have blocked the star's light."

"This is very strange star," Marengo said. "We may not know yet what's going on around this star. But that's what makes it so interesting."

The Search for Extraterrestrial Intelligence Institute has been monitoring the star since early October. Situated 1,500 light years away between the Cygnus and Lyra constellations, light from the star system occasionally has dropped by 20%. SETI Institute started investigating the star after learning that the Kepler team had vetted data showing there is an atypical light pattern coming from the region.

Using the Allen Telescope Array, which comprises a large number of small dishes used to monitor wavelengths, SETI Institute said it has not detected radio signals.

The telescope, in the Cascade Mountains in California, was searching for two different types of radio signals -- possible markers for technology.

The first type of radio signals, narrow-band signals, theoretically emit a "hailing signal" that a society would use if it wanted to announce its presence. They are most often sought in radio experiments, according to the SETI Institute. The second type -- broadband signals -- might be present if there was an ancient alien structure in the star system.

What the institute is looking for are signals from transmitters such as from a television station or a radar, senior astronomer Seth Shostak told CNN. But so far they haven't picked up anything from KIC 8462852.

But that doesn't rule out intelligent life in the star system or other parts of the universe, Shostak said.

"There is estimated to be in our galaxy alone a trillion planets. And we can see 100 billion galaxies," he said. "It's believed that one in 10 stars may have a habitable world capable of supporting life. That's a lot of real estate."

Several theories have been offered up as explanations for the star's aperiodic light variation.

In September, Yale postdoctoral astronomy fellow Tabetha Boyajian, who is on Planet Hunters' advisory team, and other colleagues published an academic paper that theorized the light changes could be from comet fragments. However, Boyajian told CNN in October that future observations are still needed.

Other theories that have been tossed around by experts and astronomy novices include a swarm of comets, an undetected celestial phenomenon heading toward Earth or the most attention-grabbing -- an "alien megastructure," a term coined by some Internet users.

"The history of astronomy tells us that every time we thought we had found a phenomenon due to the activities of extraterrestrials, we were wrong," Shostak said.

"But although it's quite likely that this star's strange behavior is due to nature, not aliens, it's only prudent to check such things out."