Name of man shot by police appears in lights 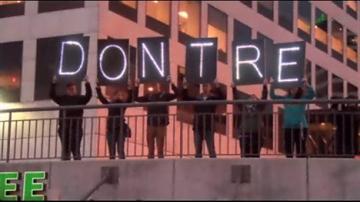 MILWAUKEE-Strangers turned out Friday night to support the mother and other family of a mentally ill man shot dead by a Milwaukee police  officer.

The name of Dontre Hamilton appeared in lights looking over the spot in Red Arrow Park where he was shot multiple times during a struggle with an officer on foot patrol.

Mourners stood there for 31 minutes, marking each year of his life.

His family said he struggled with mental illness and was paranoid but had a good nature.

They're not pointing fingers since police say Hamilton struck the officer with his own police baton.

They still want those in power to follow through with calls for better social services and want Milwaukee Police to examine their procedure in dealing with the mentally ill.

\"It's just so confusing,\" Hamilton's brother Nathaniel told CBS 58 at the vigil. \"We want answers. We want to find the truth out.\"

The state department of justice is part of the review into the actions of the police officer who was hospitalized for head injuries.

Hamilton's family said it would give them peace of mind to have more details.