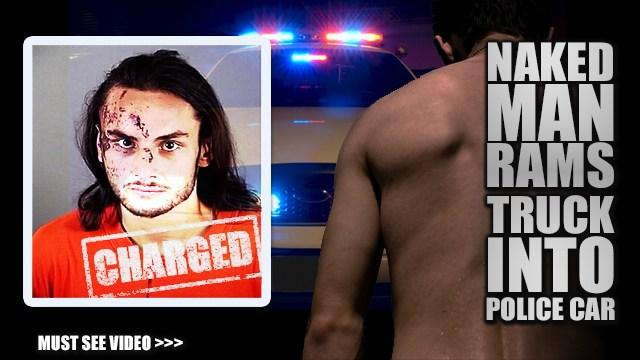 The naked man who rammed his truck into Waukesha squad cars has been charged.

Officers were parked in the parking lot of Haertle  Field, located at 440 W. Newhall Avenue in the City of Waukesha.

Officers heard a loud tire squeal and both were struck by Erickson.

One of the officers exited his squad and ordered the defendant to turn the vehicle off. But Erickson ignored requests and rapidly accelerated.

He reached speeds of 90 mph. He drove through red traffic lights.

At one point the officer noticed the defendant raise his middle finger toward the officer.

On West Sunset Drive at Oakdale Drive, Erickson slammed on his brakes causing him to spin 180 degrees.

An officer stopped his vehicle and got out to approach Erickson, when Erickson accelerated again.

His truck flipped over and became airborne after losing control in a parking lot.

He got out of his vehicle and began walking. This is when officers observed he was completely nude.