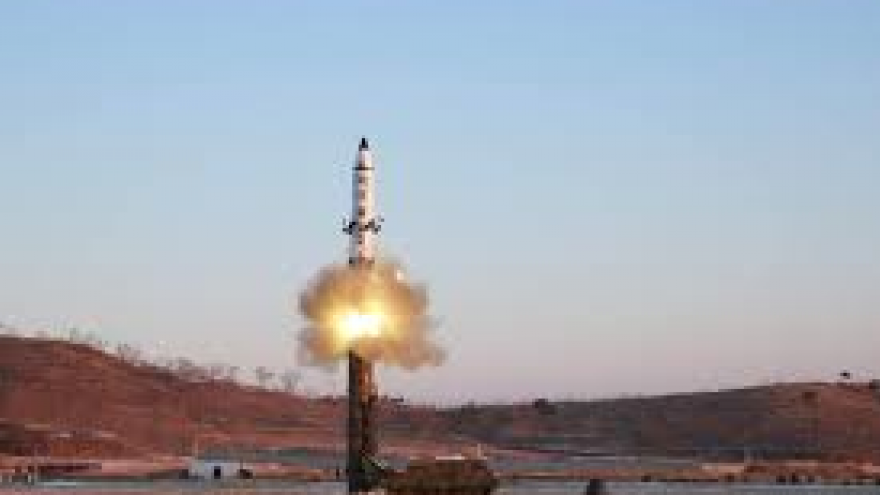 It was the regime's most successful missile test to date, but officials in in South Korea said more information was needed before the North's inflammatory claim about nuclear warheads could be confirmed.

U.S. officials had yet to react to the North's claim, but Japan said, regardless, the new test showed "some progress" in the isolated country's missile programme and was thus further evidence that "we have entered a new level of threat regarding North Korea."

Speaking Monday in Tokyo, Japanese Chief Cabinet Secretary Yoshihide Suga noted that along with the U.S. and South Korea, Japan was going to push this week at the United Nations for greater unity, including efforts to extend "diplomatic cooperation with China and Russia and other countries that have a strong influence" over the North.Sunday's launch was the North's seventh missile test this year.

North Korea claims the missile was a new model. Dictator Kim Jong Un personally oversaw the launch and, according to state media, warned that U.S. territories were within reach and that the North was capable of a retaliatory strike.

CBS News correspondent Adriana Diaz reports the missile, described by U.S. officials as a KN-17 medium range missile, reached an altitude of more than 1,300 miles -- fired, North Korea said, intentionally at a high angle out of consideration for its neighbors.It traveled more than 400 miles before splashing down into the Sea of Japan, roughly 60 miles from Russia, according to U.S. intelligence.

If launched at a normal trajectory, officials believe it could reach U.S. military bases in Guam.

While the White House called for stronger sanctions and noted the missile's proximity to Russia, saying President Trump could not "imagine that Russia is pleased."

Russian President Vladimir Putin weighed in Monday morning, calling the test "counterproductive" and "dangerous," but he also suggested the U.S. and it's regional allies could bear some of the blame, saying "we must stop intimidating North Korea."

The timing couldn't have been worse for Chinese President Xi Jinping, who was hosting world leaders, including Putin, at a global forum in Beijing.

North Korea has tested dozens of banned missiles in the last year, though this was the first one deemed by U.S. officials to have been a success, after a string of recent failures."North Korea is capable of continuing to develop longer-range missiles," Physicist David Wright, told CBS News, adding that the regime's longest-distance test to date shows they are inching closer to a missile capable of reaching the U.S. mainland.

"I think this is an important step sort of showing where it is headed," Wright said. He added, however, that in his view, "there is still a window for trying to negotiate with North Korea… at a point which it is much less of a threat to the U.S.

Over the weekend, a senior North Korean official said direct talks with Washington were possible under the right circumstances, echoing a recent statement made by President Trump. But according to U.S. officials, missile launches like this one are a deal-breaker for any hypothetical dialogue.