Music and Dementia: A UWM study brings hope to patients with Advancing Alzheimer's 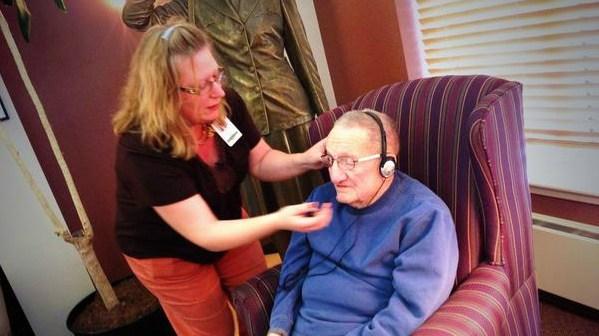 As he plays the Christian hymn, \"How Great Thou Art,\" Mike Knutson has been through a lot with his harmonica.

\"Everybody knows him for that, he loves to play the harmonica, and entertain the troops,\" said Barb Knutson, Mike's daughter.

Mike's family says he taught himself how to play the harmonica at a young age.  The instrument has taken Mike from World War Two, to fatherhood, and now-- his golden years.  The retired soldier has always had a passion for music.

Mike's memory may be fading, but when he listens to some of his favorite songs, some of those memories-- come back.

\"At this point in time-- he's able to sometimes recognize me,\" said Barb, \"he might say daughter, just yesterday-- he called me by my first name.\"

\"It could be an hour or so later, and he'd look at me and really wonder who I am-- you just never know,\" said Barb.

Regardless of his condition, Barb says her father still loves to sing.

\"Ever since we were children, we used to sing together as a family,\" said Barb.

\"You Are My Sunshine,\" was one of the songs they always sang together, the song is just one of many from Mike's play list in the Music and Memory Program at the Wisconsin Veteran's Home in Union Grove, Racine County.

\"When we put his headphones on and play his music, he instantly perks up,\" said Kelly Mack, a recreational therapy assistant at the Wisconsin Veteran's Home.

Mike is helping researchers at UW Milwaukee find out if music can help dementia patients bring back personal memories.

\"People seem to really have maintained their musical memories and their musical abilities even after the dementia has progressed,\" said Prof. Jung Kwak, who leads the study.

Prof. Kwak is working with patients from 10 retirement homes in Southeast Wisconsin to gather data.

\"The response from the staff and family members has been very positive,\" said Prof. Kwak.

The study is still in progress, but Mike's family says, it's helping.

\"I think the more opportunities he has to be connected to music, the more awake he is, and the more aware he is of what is going on all around him,\" said Barb.

Researchers are also studying if music helps reduce each patient's use of anti-depressants and anti-anxiety medication.  The Music and Memory program will expand to 200 retirement homes next year.