Multiple cars slide into semi near Miller Park, dozens of other crashes Monday into Tuesday 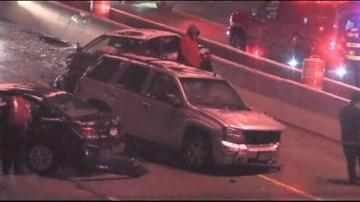 WAUWATOSA -- It was a busy night on area highways as emergency responders were dispatched to several multi-vehicle accidents blamed on ice and blowing snow.

At least 30 vehicles were towed from a pile-up on northbound US 45 near Mayfair Road.

The crash happened just before 11 p.m. Monday and involved two semi-trucks and two school buses, according to the Milwaukee County Sheriff's Office.

At least 42 students were on board one of the school buses, but none of the students reported any injuries.

According to preliminary reports, one woman in another vehicle reported feeling pain in her neck after the crash.

Crews spent hours removing vehicles from the scene. The northbound lanes of traffic opened around 4 a.m.

A spokesperson tells CBS 58 News that deputies reported seeing highway salt trucks on the roads prior to the crash.

In Waukesha County, around 11:00 pm near Brookfield, blowing snow and icy roads caused a crash involving seven vehicles on I-94 eastbound near Calhoun Road, resulting in a full freeway closure.

At least one person was taken to the hospital with unknown injuries. Lanes reopened just after 1 a.m.

The Waukesha County Sheriff's Department said crews did not salt the highways prior to the crash.

Officials advise that roads and overpasses may still be icy leading into the morning commute Tuesday.