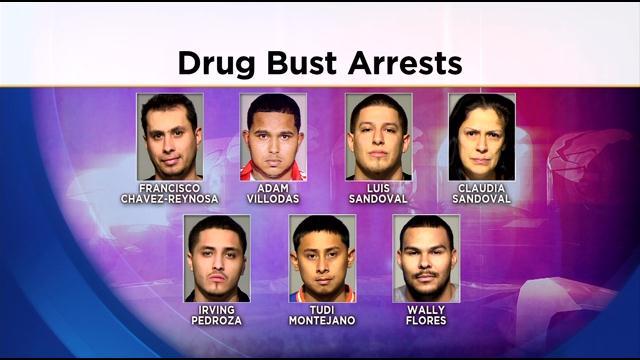 Police say this was a major hit in the Milwaukee war on drugs. The cocaine and heroin ring spanned all across Wisconsin including Green Bay, and into Chicago.

It took several months of investigation but the Milwaukee High Intensity Drug Task Force have knocked out a key player in a heroin and cocaine drug ring. Francisco Chavez- Reynosa was arrested in Green Bay two weeks ago. He's the alleged leader of 6 people, Wally Lee Flores, Tudi Montejano, Irving I Pedroza, Claudia Sandoval, Luis Angel Sandova, and Adam J Villodas Jr. who were trafficking and selling drugs across Milwaukee.

More than $100,000, four guns, and large amounts of cocaine and heroin have been confiscated in drug busts involving those people. It began in November when police uncovered the main drug house in the 1800 South Layton Boulevard. Police allege the people inside were a team, mother and son Luis and Claudia Sandoval. When caught, Luis tried throwing cocaine out the windows.

The busts are significant, because they break down the complicated trafficking system between Milwaukee and Chicago, where Chavez-Reynosa got the drugs. Police say ultimately those seven people contribute to the crime, death, and addiction that they say run rampant in our communities.